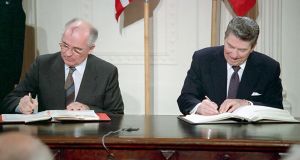 December 1987: Soviet general secretary Mikhail Gorbachev and US president Ronald Reagan signing the INF treaty, in Washington. The US on Friday announced its intention to withdraw from the treaty because of Russia’s violation. Photograph: EPA

The United States has announced its intention to withdraw from a key nuclear arms treaty with Russia, sparking fears about a potential new arms race.

The White House confirmed that the US is suspending its compliance with the Intermediate-Range Nuclear Forces (INF) treaty and will officially withdraw in six months’ time. It follows warnings by President Donald Trump last year that the US was reassessing the treaty, which was signed by former president Ronald Reagan and Soviet leader Mikhail Gorbachev in 1987.

“The United States has fully adhered to the INF treaty for more than 30 years, but we will not remain constrained by its terms while Russia misrepresents its actions,” Mr Trump said, referring to the cold war-era pact. “We cannot be the only country in the world unilaterally bound by this treaty, or any other. We will move forward with developing our own military response options.”

In a statement, Nato said it strongly supported the United States and called on Russia to “urgently return to full and verifiable compliance”.

But critics saw the move as the latest example of the Trump administration walking away from an international agreement, noting that the suspension will leave the US free to begin developing its own weapons outside the limits prescribed by the treaty.

The treaty, signed as the cold war drew to a close, banned land-based cruise missiles with a range of between 500km and 5,000km. But the US has accused Russia of flouting the agreement, arguing that a missile it deploys near its western border violates the terms of the treaty.

The notice of suspension by the US starts a six-month withdrawal period, raising the possibility that Russia could rectify its alleged violations in that time.

But Moscow has hit back at the US stance, claiming that Washington had been “unwilling to hold any substantial talks”.

There is also concern that China, which has been increasing its nuclear arsenal, is not a signatory to the agreement.

Speaking in the Oval Office, Mr Trump said he hoped to get “everybody into a big and beautiful room and do a new treaty which would be much better. You have to have everybody adhere to it.”

Senior Democrats criticised the move. Connecticut senator Chris Murphy said the decision was a “gift to Russia”. It “allows them to speed ahead with medium-range nuclear weapons without the watchful eye of the US,” he said. “We get no benefit and loads of additional risk.”