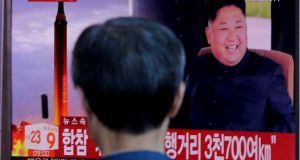 North Korea has agreed to hold high-level talks with South Korea next week as the détente between the two nations picks up pace.

The talks – the first inter-Korean dialogue in more than two years – will focus on the North’s potential participation in next month’s Winter Olympics, which will be held in Pyeongchang, South Korea.

The move represents a turnaround in the approach of North Korea, which throughout last year shunned dialogue as it focused on the development of an array of ballistic missiles and tested its largest nuclear weapon to date.

The development comes less than a day after Washington and Seoul agreed to postpone their annual springtime military exercises, which regularly raise the hackles of the regime in Pyongyang and are often used as a pretext for provocations.

After launching its most advanced rocket yet in November, North Korean leader Kim Jong-un declared the completion of the nation’s nuclear force, prompting speculation about a potential opening for negotiations.

On Friday, the regime confirmed such predictions, agreeing to meet South Korean officials on Tuesday, most likely in the border village of Panmunjom.

Korea experts have long been sceptical about such proposals, viewing them as means for the North to lower tensions while continuing to develop its ballistic missiles and nuclear weapons programmes.

Such talks also run the risk of driving a wedge between the US and South Korea – two long-time allies whose presidents hold diverging opinions on how to deal with the threat from Pyongyang.

The US has been ambivalent on the topic of inter-Korean dialogue and fears talks could undermine Washington’s “maximum pressure” approach to denuclearising North Korea.

South Korean officials have played down such concerns, saying the focus of discussion would be on Pyongyang’s participation in the Winter Olympics.

Cheong Seong-chang, a senior fellow at the Sejong Institute think tank, said the scope of the talks would be limited as South Korea cannot unilaterally pursue engagement with the regime.

“North Korea has no interest in denuclearising or freezing its nuclear programme. Rather they are working to deploy and mass-produce nuclear warheads and ballistic missiles,” he said.

On Thursday, US president Donald Trump appeared to claim credit for the developments, tweeting that the talks were a “good thing”.

“Does anybody really believe that talks and dialogue would be going on between North and South Korea right now if I wasn’t firm, strong and willing to commit our total ‘might’ against the North,” the US president tweeted.

Seoul hopes North Korea’s participation in the Olympics could pave the wave for reduced tensions in the region and broader discussions about North Korea’s nuclear programme.

However, experts have already suggested that South Korea could violate international sanctions if it offers financial assistance to its reclusive neighbour to attend the event or if it invites blacklisted individuals. – Copyright The Financial Times Limited 2018