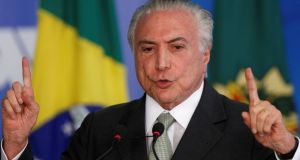 Brazil’s president, Michel Temer, whose pensions reform plan, already heavily watered down since it was unveiled a year ago, was last week all but abandoned. Photograph: Adriano Machado/Reuters

In a bitter historical irony Brazil’s pensions system, originally created to provide a social safety net and so promote greater equality, has morphed into one of the principal pillars of the country’s notorious inequality.

By global standards Brazil lets people retire too soon and on too generous pensions. As a result, despite possessing a far younger population, the country spends more on pensions than wealthier nations burdened with far older demographic profiles such as Japan.

Though less than 10 per cent of Brazilians are over 65 this is already sustainable only through heavy borrowing. About half of the government’s near 10 per cent budget deficit is the result of plugging shortfalls in the pension system.

And even this irresponsible fix is living on borrowed time. Brazil is ageing quickly. By 2050 a quarter of the population could be over 65. If something does not change soon the country will either blow up its finances or tear up its social compact, or more likely do both.

Much of this is due to the privileges accrued by one of Brazil’s more favoured castes – public-sector workers. By one calculation the deficit in the federal worker pension system is bigger than in the general system for private workers even though the former takes care of just one million people compared with 33 million in the latter.

When Brazil’s poor ask why there is not enough money to provide decent public education or healthcare, part of the answer is the government is spending the funds instead on pensions, and directing most of this cash to the relatively well-heeled, if not quite members of the helicopter-travelling elite.

President Michel Temer (77) knows all this is unsustainable. He himself first retired 22 years ago on a whopping state prosecutor’s pension. Last year in his first speech as president he promised to reform some of the lunacies of this retirement system.

But last week the government retreated in the face of opposition from well-organised and highly motivated public sector unions which successfully portrayed reform as an attack on workers’ rights.

Technically true this argument elides the fact that in Brazil public-sector workers should not be confused with the working class, never mind with the one in four of the population who live in poverty and are far more deserving of public spending.

The government dropped its reform when it realised deputies, having already voted twice this year to help Temer avoid trial for corruption, would not countenance a third deeply unpopular vote with a general election looming next October. Ministers say they will try again in February but if the votes are not there now they are even less likely to be closer to the election.

Temer’s government failed miserably to make the counterargument that reform is not only a fiscal but social imperative. But having overseen a squalid, corruption-tainted 19 months in office it lacked the moral authority to do so.

If the government or congress had taken up some of the other major challenges Brazil needs to tackle in order to boost equality – say political reform or rewriting to the deeply regressive tax code – they could have built up some of the moral authority needed to pass pension reform. But they have not, instead busily attending to special interests, their own most of all.