Trump is considered ‘a moron’ by staff, author claims

‘Fire and Fury’ writer defends the book, saying Trump is less credible ‘than anyone on Earth’ 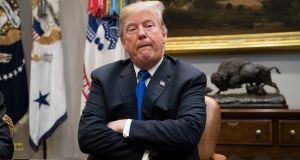 President Donald Trump pictured in the Roosevelt Room of the White House in Washington on January 4th. Photograph: The New York Times

The author of an explosive new book about Donald Trump’s first year in office has said he stands by his reporting and that the president’s threat of legal action is only boosting his sales.

Michael Wolff also stood by his account that many in the administration think Trump is incapable of meeting the demands of his role – claims which have prompted a furious backlash from the White House.

Discussing Trump’s response to the book on NBC’s Today show on Friday, in his first interview since publication of excerpts from the book by the Guardian triggered a political firestorm, Wolff asked: “Where do I send the box of chocolates?

“Not only is he helping me sell books, but he’s helping me prove the point of the book.

“I mean, this is extraordinary that a president of the United States would try to stop the publication of a book. This doesn’t happen, has not happened from other presidents, would not even happen from the CEO of a mid-sized company.

Trump’s lawyer had demanded a halt to the publication of the book, titled Fire and Fury: Inside the Trump White House, or excerpts. Its publisher instead brought forward the release date to Friday. The book offers a scathing portrait of a dysfunctional White House and a president who is out of his depth.

Trump attacked Wolff on Thursday evening, tweeting: “I authorized Zero access to White House (actually turned him down many times) for author of phony book! I never spoke to him for book. Full of lies, misrepresentations and sources that don’t exist.”

Wolff, a media critic and columnist, responded: “What was I doing there if he didn’t want me to be there? I absolutely spoke to the president. Whether he realised it was an interview or not, I don’t know, but it certainly was not off the record.”

The author spent about three hours with Trump during the election campaign and in the White House, he said, “so my window into Donald Trump is pretty significant”.

Well, now that collusion with Russia is proving to be a total hoax and the only collusion is with Hillary Clinton and the FBI/Russia, the Fake News Media (Mainstream) and this phony new book are hitting out at every new front imaginable. They should try winning an election. Sad!

I authorized Zero access to White House (actually turned him down many times) for author of phony book! I never spoke to him for book. Full of lies, misrepresentations and sources that don’t exist. Look at this guy’s past and watch what happens to him and Sloppy Steve!

Wolff’s new book is drawn from what he said was regular access to the West Wing and more than 200 interviews, including with Trump. Asked how he gained such extraordinary access, Wolff said: “I certainly said whatever was necessary to get the story.”

The White House has repeatedly dismissed the book as “tabloid gossip”, “sad”, “pathetic” and full of “lies” and some media commentators have cast doubt on Wolff’s credibility.

Wolff said that, like any journalist, he has recordings and notes and is “in every way comfortable” with everything he reported in the book.

“My credibility is being questioned by a man who has less credibility than perhaps anyone who has ever walked on Earth at this point,” he said.

A recurring theme in Fire and Fury is the question of Trump’s fitness for office. Wolff suggested that even the president’s son-in-law, Jared Kushner, and daughter, Ivanka Trump, have lost faith in his ability to do the job.

“Certainly Jared and Ivanka, in their current situation, which is a deep legal quagmire, are putting everything on the president,” he said. “‘Not us, it’s him.’”

Wolff added: “I will tell you the one description that everyone gave, everyone has in common. They all say, ‘He is like a child’, and what they mean by that is he has a need for immediate gratification. It’s all about him. He just has to be satisfied in the moment.

“They say he’s a moron, an idiot. Actually, there’s a competition to sort of get to the bottom line here of who is this man. Let’s remember, this man does not read, does not listen, so he’s like a pinball just shooting off the sides.”

The White House has pushed back against the claims of Trump’s incapacity, with press secretary Sarah Sanders saying on Thursday that such claims were “disgraceful and laughable”.

Writing on Twitter on Thursday without mentioning Wolff by name, Trump also said: “Look at this guy’s past and watch what happens to him and Sloppy Steve!”, the latter an apparent reference to former White House strategist Steve Bannon.

Mr Bannon is depicted in the book as questioning Trump’s competence and as describing a June 2016 meeting between Donald Trump jnr, Trump campaign aides and a Russian lawyer as “treasonous”.

White House officials described the president as furious at Mr Bannon’s criticisms, and Ms Sanders went as far as to suggest that Mr Bannon ought to be ousted from Breitbart, the populist website he helps run.

“I certainly think that it’s something they should look at and consider,” she said.

Mr Bannon had helped Trump form the coalition of anti-establishment Republicans, blue-collar working class and economic nationalists that launched him to the White House, but Trump had long ago grown frustrated that Mr Bannon seemed to be overstepping his role as a staffer.

Republican Senate Majority Leader Mitch McConnell, a longtime punching bag for Mr Bannon, revelled in his break with the president. “I’d like to associate myself with what the president had to say about Steve Bannon yesterday,” he said mischievously on Thursday.

The book quickly shot to the top of Amazon’s bestseller list, and the publisher moved up its release date by four days to Friday. – Guardian service and AP