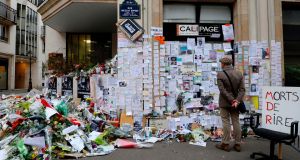 A makeshift memorial near the headquarters of the French satirical weekly ‘Charlie Hebdo’ in Paris in January 2015 in tribute to the 17 victims of a three-day killing spree by Islamist terrorists. Photograph: Bertrand Guay/AFP/Getty Images 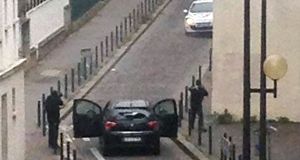 Gunmen face police officers near the offices of ‘Charlie Hebdo’ in Paris on January 7th, 2015, during an attack on the offices of the newspaper. Photograph: Anne Gelbard/AFP/Getty Images 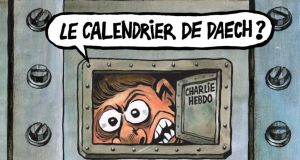 The cover of Charlie Hebdo’s first issue of 2018 features a cartoon in which a fearful face peers through a peephole in a bolted steel door. “The Islamic State calendar?” the character asks, referring to the French tradition of selling new-year calendars door to door.

Three years after gunmen burst into an editorial conference and slaughtered 12 people at the satirical weekly Charlie Hebdo, surviving journalists have published a cry of pain and a plea for protection.

“Three years in a tin can” is the title of the magazine’s first issue of 2018. The cartoon is drawn by Riss, who replaced Charlie Hebdo’s murdered director, Charb. Riss received a Kalashnikov bullet in the shoulder during the attack.

In Riss’s drawing, a fear-crazed face peers through a peephole in a bolted steel door. “The Islamic State calendar?” the character asks, referring to the French tradition of selling new year’s calendars door to door, “We’ve already given.”

Until now, Riss writes in an editorial titled “Freedom of expression, how much does it cost?”, Charlie Hebdo did not publicise post-attack working conditions.

“January 7th, 2015, is the blood-red date between two different lives,” writes journalist Fabrice Nicolino is a vivid and chilling description of living with fear. Nicolino was shot in both legs, a thigh and the shoulder. He recalls “the nightmare of repeated operations” and “cops with automatic weapons following us to physical therapy sessions”.

Nicolino quotes colleagues at length, without revealing their names: “I’m afraid when I’m outside, afraid when I see cops, afraid indoors, afraid of unidentified sounds. I’m afraid in the ‘panic room’ because I’m claustrophobic. I’m afraid, because I’m convinced I’ll hear the click-clack of Kalashnikovs again one day. There must be a way of overcoming this fear, but how?”

Staff say they “live like illegal aliens”. One admits to “knots in my stomach” each time he arrives at Charlie Hebdo’s secret location. Another recounts: “I’m in front of the door and I turn around, which is absurd, because if there’s someone in the street, it’s too late. My eyes fall on the funeral parlour across the road, which makes me smile inside.”

After the publication of a drawing mocking Vladimir Putin, a Russian website published a journalist’s real name, address and the map to his house.

Each time a play by the slain director Charb is performed in provincial cultural centres, police block surrounding streets and search everyone. Bookshop owners have cancelled appearances by Charlie staff: “I understand, because every time one of us goes anywhere, there’s a police circus. When we leave, the bookseller is all alone.”

Charlie continues to receive threats. “Most are ridiculous,” Nicolino writes. “But some really smell like death.”

Fear has not extinguished the magazine’s sense of humour. Finding no one at home and the concierge absent, the brother of a journalist left a gift on his doorstep, which a neighbour saw through her peephole. She alerted police, who blew up the package. It was filled with cherries from the countryside. A cartoon of the “cherry attack” shows walls and floors smeared with red.

A journalist recounts, laughing, that police thought they saw someone on his roof. “One of them went to the top of the neighbouring building to check, while three cops stood with guns in their hands in my living room.”

Only those Charlie Hebdo staff who are public figures receive police protection. Their number is secret. The government does not protect the offices or some 15 people who work there.

Charlie Hebdo pays up to €1.5 million annually to a private security company. Nicolino lists “numerous special doors that look like Fort Knox, lifts, stairs, airlock passages and a code word signifying a serious threat that would send everyone to the panic room”.

“Is it normal that more than one in two issues of a magazine sold in a democratic country should go to finance the security of its offices and the journalists who work there?” Riss asks in his editorial. “Freedom of expression is becoming a luxury item.”

Nicolino appeals to President Emmanuel Macron: “Is it fair that we be forced to privatise our freedom and security by paying a private police force?”

At his new year’s wishes to the press on Wednesday night, Macron told The Irish Times: “Having heard their appeal, I have asked the interior ministry to evaluate the risk and provide security if the risk is confirmed.”

The French leader will commemorate the attack on Charlie Hebdo, and the one at the Hyper Cacher store two days later in which four more people were killed, at an event this Sunday.