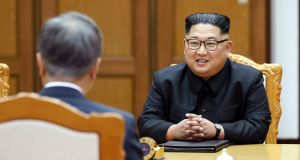 With a week to go until a summit between Donald Trump and Kim Jong-un in Singapore, the North Korean leader has reshuffled the top brass of the powerful Korean People’s Army.

All three of the country’s top military officials have been replaced by younger leaders, said to be deeply loyal to Mr Kim, in what seems to be an effort to keep a tight grip on the armed forces ahead of the summit.

South Korean intelligence sources told the Yonhap news agency that Mr Kim is trying to keep the military in check in advance of a possible deal on denuclearisation of the Korean peninsula, as the Korean People’s Army may object to that outcome.

Under the changes, No Kwang-chol replaced Pak Yong-sik as defence chief, while Ri Myong-su, chief of the KPA general staff, was replaced by his deputy, Ri Yong-gil.

“The North appears to have brought in new figures amid the changes in inter-Korean relations and the situation on the Korean Peninsula as the previous officials lacked flexibility in thinking,” the intelligence source said, quoted on Yonhap. “In particular, No Kwang-chol has been classified as a moderate person.”

There could also be economic aspects to the decision. The KPA controls large sections of the economy.

The US president is tentatively scheduled to meet Mr Kim at 9am (2am Irish time) on June 12th, the White House said. The announcement came three days after Mr Trump met a senior North Korean delegation bearing a letter from Mr Kim.

It will be the first meeting between a sitting US president and a leader of North Korea. Mr Trump previously cancelled the summit, but has since announced that it is back on.

The White House said that North Korean policy had not changed, despite the closer ties, and sanctions would remain in place.

However, the US has notably changed its tone on North Korea, including avoiding the expression “maximum pressure” to describe sanctions policy.

If it does actually take place, the Trump-Kim summit will follow two meetings between Mr Kim and South Korean president Moon Jae-in.

The South Koreans hoped the meetings would lay the groundwork for a declaration formally ending the Korean War (1950-53), which ended with an armistice but without a peace treaty.

“Additional issues, such as a declaration of an end to the war, will be pursued by the South, the North and the United States under close co-operation with the international community after carefully watching the progress in the North Korea-US summit,” the presidential Blue House said in a statement.

There is speculation that the summit may take place in the Shangri-La hotel in downtown Singapore after the area around the hotel was designated a “special event area” for the time of the summit.

The Shangri-La hosts the annual security meeting, the Shangri-La Dialogue, and it was also where China’s president Xi Jinping shook hands with then-Taiwan leader Ma Ying-jeou back in 2015.