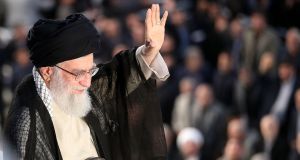 Iran has begun preparations to boost its uranium enrichment capacity, its nuclear chief said on Tuesday, adding to pressure on European powers trying to save a nuclear accord with Tehran after the US withdrawal.

France, Britain and Germany want to salvage the 2015 deal’s core bargain of sanctions relief in exchange for restrictions on Tehran’s atomic activities. Washington has reimposed sanctions against Tehran since quitting the deal last month, arguing Iran posed a security threat.

Iran has set out conditions to stay in the nuclear deal, including steps to safeguard trade with Tehran and guarantee Iranian oil sales. But it has also said it could resume its 20 per cent uranium enrichment, which is banned under the deal.

Supreme leader Ayatollah Ali Khamenei said on Monday he had ordered preparations for Iran to have greater enrichment capacity if the deal falls apart.

Iran’s nuclear agency said it would inform the UN nuclear watchdog on Tuesday that the process to increase capacity had begun. Mr Salehi said this did not violate the nuclear deal but that it marked an increase in the pace of the nuclear programme.

“If we were progressing normally, it would have taken six or seven years, but this will now be ready in the coming weeks and months,” he said.

Iran has also developed the capacity to produce electricity at Natanz, Mr Salehi said, a site which lies about 300km south of Tehran.

The 2015 agreement allows Iran to continue 3.67 per cent uranium enrichment, far below the roughly 90 per cent threshold of weapons-grade. Before the deal was reached, Tehran enriched uranium to up to 20 per cent purity.

Mr Salehi’s comments on Tuesday appeared to be a warning to the remaining signatories of possible consequences if the deal were to collapse. European powers still back the deal but have concerns over Iran’s ballistic missile programme and its influence in the Middle East.

Iran says the two issues are non-negotiable. Mr Salehi said Iran could not accept a “flawed” nuclear deal, nor could it adhere to the deal’s restrictions while facing new sanctions.

He reiterated previous statements by officials that Iran is prepared to significantly increase its nuclear activity if the deal falls apart. “Then the situation will progress in a different way,” Mr Salehi said. “I hope there will never be a need to go back to that situation.”

He also repeated Iran’s position that its nuclear programme was for civilian purposes only. – Reuters