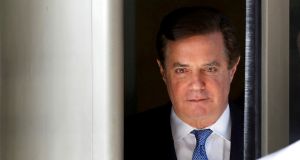 Paul Manafort has been indicted in federal courts in Virginia and Washington DC with allegations ranging from money laundering and failing to register as a foreign agent, to bank and tax fraud. Photograph: Yuri Gripas/Reuters

US president Donald Trump’s former campaign chairman, Paul Manafort, who has been indicted by special counsel Robert Mueller, attempted to tamper with potential witnesses, Mr Mueller said in a court filing on Monday.

Mr Mueller, who is investigating possible collusion between the Trump election campaign and Russia, asked the judge overseeing the case in US district court for the District of Columbia to revoke or revise an order releasing Mr Manafort ahead of his trial.

Mr Manafort was released to home confinement after his arraignment in October.

Mr Mueller has indicted Mr Manafort in federal courts in Virginia and Washington DC with an array of allegations from money laundering and failing to register as a foreign agent, to bank and tax fraud. Mr Manafort has pleaded not guilty.

FBI special agent Brock Domin, in a declaration filed with Mr Mueller’s motion, said Mr Manafort had attempted to call, text and send encrypted messages in February to two people from “The Hapsburg Group”, a firm he worked with to promote the interests of Ukraine.

The FBI has documents and statements from the two people, as well as telephone records and documents recovered through a search of Mr Manafort’s iCloud account showing that Mr Trump’s former campaign manager attempted communication while he was out on bail, according to Mr Domin.

The communications were “in an effort to influence their testimony and to otherwise conceal evidence”, Mr Domin wrote. “The investigation into this matter is ongoing.”

Mr Manafort is the most senior member of Mr Trump’s campaign to be indicted, though the charges do not relate to campaign activities.

Mr Mueller urged Judge Amy Berman Jackson to “promptly” schedule a hearing on the whether to change Mr Manafort’s conditions of release, which could result in Mr Manafort going to jail.

The Washington trial is set to start on September 17th.