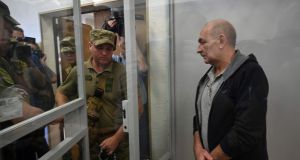 Vladimir Tsemakh, a Ukrainian man suspected of involvement in the downing of flight MH17 has been released from custody in Kiev. Photograph: Sergei Supinsky/AFP/Getty Images

A long-awaited prisoner swap between Russia and Ukraine should take place in the near future, Russian president Vladimir Putin announced on Thursday, shortly after a Kiev court freed a suspect in the 2014 downing of Flight MH17.

“As for the exchange, I think it will be pretty big, major, and it would be a good step forward towards the normalisation [of relations],” Mr Putin said in Vladivostok.

“We are nearing the completion of talks that we are holding with, among others, the official [Ukrainian] authorities, so I think this [outcome] will become known in the near future,” he added.

After five years of conflict between the neighbours, an exchange of dozens of detainees was expected last week, but Ukrainian media say it was delayed due to Russia’s demand that Kiev release Vladimir Tsemakh, who fought for Moscow-led separatists in eastern Ukraine.

Mr Tsemakh allegedly commanded a militia air-defence unit in the war-torn Donbas region close to where Flight MH17 from Amsterdam to Kuala Lumpur was shot down in July 2014, killing all 298 people on board. He was seized from his apartment in separatist-held territory in June in a bold raid by Ukrainian security service officers.

Dutch prosecutors say the missile fired at the Boeing 777 came from the Russian military, and so far they have charged three Russians and one Ukrainian in the case and regard Mr Tsemakh as a suspect. Moscow denies any involvement in the atrocity.

Mr Putin spoke soon after a Kiev court decided to free Mr Tsemakh from custody, pending further investigation of his role in fighting that has killed more than 13,000 people and displaced some 1.6 million since spring 2014.

His release may anger Ukrainians who oppose making concessions to the Kremlin and strain Kiev’s relations with western allies who demand justice for MH17 victims. It is also unclear, however, how Mr Tsemakh could be part of any official exchange of detainees with Russia now that he is no longer in custody.

In an August 30th letter that was leaked to the press, Dutch prosecutor Fred Westerbeke told Ukrainian officials: “Due to Mr Tsemakh’s status as a suspect in the Dutch criminal investigation, keeping him available for [further] questioning by the joint investigative team is therefore of the utmost importance.”

On Wednesday, 40 members of the European Parliament wrote to Ukrainian president Volodymyr Zelenskiy and EU foreign policy chief Federica Mogherini about the need to prevent Mr Tsemakh being handed to Russia.

“While we understand the context within which such negotiations are taking place and the diplomatic efforts by the Ukrainian authorities to this end, Mr Tsemakh is a suspect in the [MH17] criminal investigation . . . and his availability and testimony before the joint investigation team is thus of the utmost importance for an effective prosecution by the countries involved,” they said.

“It is our hope that the present letter receives all the attention it deserves so that justice can be done to all the victims and to the suffering of all those who have lost their loved ones.”