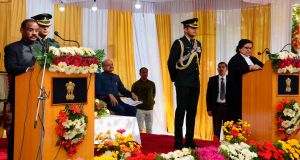 Offices and shops were closed and streets deserted on Thursday in India’s northern disputed Kashmir region, as it formally split into two federally administered territories nearly three months after its special constitutional status was revoked by the federal government.

Under the new arrangement Jammu and Kashmir becomes one territory while Ladakh, its Buddhist-majority enclave, bordering Tibet, forms a second.

The two will be ruled by lieutenant governors appointed by the federal government in New Delhi, both of whom were sworn into office on Thursday, completing the process of scrapping Kashmir’s constitutional autonomy conferred upon it seven decades ago after independence from colonial rule.

The region’s population of about 14 million is mainly divided between the Muslim-majority Himalayan Kashmir valley and the Hindu-majority Jammu region.

Ladakh, which is a high-altitude desert, has a population of about 300,000, mostly Buddhists, who have long been demanding separation from Kashmir.

Senior officials admitted the federally managed territories would now have far less autonomy than India’s 28 states and Kashmir’s affairs would be closely monitored by Delhi.

“The dream of integrating Jammu and Kashmir [with the rest of India] has been accomplished, ” said federal home minister Amit Shah, the principal architect of the policy to reorganise the restive state that is divided between India and Pakistan, but claimed in its entirety by both.

Prime minister Narendra Modi’s Hindu nationalist Bharatiya Janata Party government hopes its actions will help kick start economic growth in the region and wean people away from the three-decade-old insurgency raging in Kashmir for a Muslim homeland that has claimed over 70,000 lives.

The move, considered controversial by many officials and analysts, will also permit outsiders to settle in the region and buy land and properties, a provision previously proscribed.

Fearing a backlash in scrapping Kashmir’s special status on August 5th, the government deployed some 80,000 additional paramilitary personnel across the region and imposed a lockdown in the area by suspending all communication networks, including landline and mobile telephones, and imposing selective curfews.

Over the past few weeks, landlines and some mobile telephone networks have been restored, but internet services remain suspended.

Most educational institutes remain empty and the majority of shops, hotels and restaurants in Kashmir, a major tourist destination, are either deserted or shut in anticipation of protests against the lockdown and Kashmir’s bifurcation.

“The government of India has left Kashmiris in the lurch and shown disregard for their rights,” tweeted former Kashmir chief minister Mehbooba Mufti from custody. She urged Mr Modi’s administration to engage with Kashmiris before they become more alienated.

Militants have killed nearly a dozen migrant workers in Kashmir over the past fortnight, including five from eastern India who were lined up and shot dead on Tuesday and executed in the Kulgam district, 68km south of Kashmir’s summer capital Srinagar.

Officials said the killings appeared to be part of a campaign to deter outsiders from working in Kashmir.

Earlier, several truck drivers responsible for transporting Kashmiri apples to the rest of India were also killed by militants. This was followed by widespread protests by crowds who pelted the security forces with stones, forcing the state police to use tear gas to disperse them.