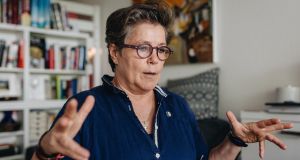 Maud Grzemba: “My mother was perhaps naive back then, but she stood up to the system in her own way and for that was made an example of.” Photograph: Nancy Jesse

Millions of German lives fell apart on a Sunday morning, August 13th, 1961, when the Berlin Wall was erected. But it was a day later, on Monday morning, when the bomb of German division shattered the life of Eveline Jabke.

She was crossing the river Spree, running late for work in a local lightbulb factory and still had to drop off her three-year-old son at his creche.

But she found her usual route blocked by armed soldiers, a cinder block wall and razor wire.

She bumped into a work colleague and told him hotly: “I find it great that at least the West Berliners were cursing the East German police at the border yesterday, shouting ‘Pointy Beard must go.’”

Pointy Beard was Walter Ulbricht, the East German leader who had just reneged on his claim, two months previously, that “no one has any intention of building a wall”.

Later on Monday her colleague denounced Eveline; on Tuesday she was collected for interrogation, given a cursory trial with no defence, handed a year’s sentence and thrown into a political prison.

It was there that Eveline Jabke discovered she was pregnant. After crying every day in prison for nine months she was released and baby Maud was born: thin and malnourished with a series of unexplained childhood illnesses.

“I’m a prison baby,” says Maud Grzemba today, sitting in her garden in the autumn sunshine and leafing through the typewritten transcript of her mother’s interrogation, 58 years ago.

Most Germans remember the fall of the Berlin Wall 30 years ago with an emotional sigh of relief. For Maud, the vanished, paranoid socialist state has left an unresolved legacy of damage.

Modern prenatal psychology suggests a mother with a relaxed, carefree pregnancy will give birth to a very different baby than a cold, terrified hungry mother in prison, who exchanged the sanitary towels she didn’t need for food.

Only as an adult was Maud able to understand the unspoken trauma of her childhood: a mother who simultaneously spoiled her while ordering her to disassociate her private from her public self.

“I can’t remember a time with her when there wasn’t fear,” said Maud.

She was 11 when she discovered her mother’s past in a stash of letters from prison to her husband. In one, her mother wrote she would give anything to have just one sweet to suck.

“My world fell apart,” said Maud. “I was getting sweets every day, and to read about my mother wanting just one. From then on I was furious.”

While the East Germany of her teens was lightening up – offering travel concessions and consumer goods to placate the walled-in population – Maud was beyond placation.

She developed a Berlin Wall fixation: studying the 3.6m-high structure in her spare time, watching the guards in the hope of finding a security weak spot.

After a few failed escape attempts, Maud decided in 1989 she’d had enough of East Germany. With her girlfriend Tina she decided to take her chances on the Hungarian border. By chance, shortly after they arrived, the first chinks opened in the Iron Curtain 15km from where they were staying. They drove into Austria, filed for asylum, and were resettled in West Berlin with a flat and jobs.

But they had only four months’ head start before the wall was breached on November 9th and Maud’s home town was reunited.

“Those days were more terrifying for me than euphoric,” she said. “It was only long after that I was grateful. Being walled in in West Berlin would have got to me eventually, too.”

Today Maud lives in the Berlin neighbourhood of Westend which, as the name suggests, is about as far as you can get within the city limits from eastern Berlin. “I hate the East,” she says.

Why? Because of how it turned her mother into an anxious, depressed person who has never shed the shame of being in prison – or the fear of others finding out. Today her 83-year-old mother receives a €380 supplementary victims’ pension.

“My mother was perhaps naive back then, but she stood up to the system in her own way and for that was made an example of,” said Maud. “There are times I was angry at her for not leaving the GDR, considering how she was treated, but now I am proud of her.”

It has taken Maud all her life to get to this point, breaking through years of anger and denial after psychotherapy and a shock cancer diagnosis.

As a survivor of an unjust regime, for her November 9th is not a day of celebration. It is a day that reminds her of her tolerance of injustice – and of fellow easterners nostalgia for East Germany’s high level of social security, paid for with political and personal repression.

November 9th is a day that reminds her how the Stasi officials who terrorised her mother and millions of others were never called to account for their actions because, under East German law, it was all legal.

“That we’ve yet to achieve justice against these people just makes me sick,” she said.

Rather than large spectacles every five years to remember the Berlin Wall’s fall, Maud hopes Germany will eventually shift towards a more personal approach.

“German division isn’t for special occasions but for the everyday,” she said. “And we still need to find a way to reflect and be thankful that we are now one people.”