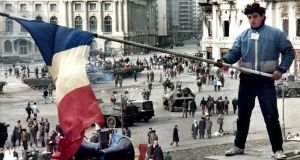 A young man waves a Romanian flag with the communist symbol cut out from the balcony of the central communist headquarters overlooking Republic Square in Bucharest on December 26th, 1989. Photograph: Rob Taggart/Reuters

Teodor Maries had never seen anything like it: Romanian riot police were locking down central Bucharest, a speech by communist dictator Nicolae Ceausescu had just been cut short by jeers and now a growing crowd of protesters was on the march to demand an end to his repressive and ruinous 24-year rule.

It was December 21st, 1989, and Maries was a third-division footballer spending time off in Bucharest when he found himself and Romania at a crossroads – and he plunged into events that both are still grappling with today.

“I thought that if I leave the pavement now and join the crowd, then there’s no way back, I will be arrested or beaten or killed,” Maries recalls. “I knew it was no joke, but I stepped into the street and started to chant with the people.”

He had caught the first whisper of revolution in the early hours of December 17th while in western Romania, where his football club was based, when he overheard two people quietly discussing news from the nearby city of Timisoara.

Hundreds of the city’s ethnic Hungarians had gathered the previous day at the house of Protestant pastor Laszlo Tokes – who was facing transfer to a remote parish in punishment for criticising the communist regime – and local Romanians had joined them as their protest spiralled into an anti-Ceausescu rally.

Ceausescu ordered riot police, soldiers and his infamous Securitate secret service to quash the unrest, and over the following days scores of people died and hundreds were hurt as security forces shot at protesters.

The bloodshed only emboldened the crowds, however, and as Timisoara spun out of the regime’s control, so the revolutionary spirit that had rippled through the communist bloc that autumn finally reached Bucharest.

Years of shortages, food and fuel rationing and power cuts – combined with the stifling surveillance of the Securitate and its ubiquitous informers – had driven Romanians to breaking point, and the capital snapped as Ceausescu spoke from the balcony of the communist central committee building on December 21st.

What began like any other tightly controlled propaganda rally ended with Ceausescu being ushered inside as whistles and chants of “Timisoara!” filled the square.

“As our numbers grew we got braver, shouting ‘Come with us!’ to people looking down from their windows,” Maries says of the crowd he joined that day.

“I was in a group of protesters walking behind an armoured vehicle as it approached a barricade manned by troops,” says Maries.

“Suddenly it turned and the troops started shooting from five or 10 metres away – pac-pac-pac – and I saw six or seven people fall down right front of my eyes. According to documents from their units, troops fired almost two million bullets that night – that’s basically one for every Bucharest resident at the time.”

But the crackdown could not save the Ceausescus.

The next morning, December 22nd, a helicopter whisked them and a few members of their entourage from the roof of central committee headquarters, just as protesters burst in from the seething square below.

Maries says he was among the first inside, and grabbed a gun and ran past piles of ammunition crates and demoralised guards to reach the rooftop just too late.

“The helicopter was already too far away. But if I’d had the chance I would have shot Ceausescu without a doubt. Hadn’t he killed us the day before? I still feel like crying when I remember those who were shot down in the street.”

The Ceausescus’ rule was over – they would be captured, summarily tried and shot by a firing squad on Christmas Day – but bloodshed continued for several days.

After Ceausescu fled, senior communist politicians and military men denounced him and formed the National Salvation Front (NSF) under the leadership of Ion Iliescu, to counter what they called a “terrorist threat” to Romania.

Chaotic clashes intensified in Bucharest and other cities, amid lurid reports of attacks by shadowy pro-Ceausescu forces and of water supplies being poisoned, sending more panic through a bewildered nation.

The vast majority of the revolution’s victims were killed and injured after Ceausescu was toppled, as police and military units received confusing orders and fired at each other and at civilians who vowed to defend the revolution.

“More than 900 people were killed and thousands injured with one aim – so the second tier of the communist leadership and the party could retain power,” says Maries (57).

He became an activist after the revolution and, as leader of the December 21st Association, he has campaigned for three decades for a full investigation into the revolution and its aftermath, even going on hunger strike several times to demand access to key files that the authorities sought to keep closed.

None of the supposed “terrorists” were ever killed, caught or identified, and many Romanians believe Iliescu and the NSF sowed panic to scare protesters off the streets and portray themselves as the only force capable of stabilising the country.

Iliescu dominated post-communist Romania for 15 years as a three-term president and founder of the powerful Social Democratic Party, but he is still dogged by questions about those deadly days of three decades ago.

Last month, a Bucharest court opened preliminary hearings into allegations that Iliescu and two associates committed crimes against humanity in December 1989, leading to the death of 862 people and injury to 2,150 after Ceausescu fled.

The indictment accuses them of “broad and complex misleading activities of diversion and misinformation” that led to “chaotic shootings and contradictory military orders” and instilled “terrorism psychosis” in the nation, with the aim of “gaining legitimacy in the eyes of the people” for the NSF.

Iliescu and his co-accused deny the charges, and Maries and many others fear the case – like its predecessors – will fail due to a cover-up or incompetence.

Yet one thing gives Maries hope: the sight of hundreds of people who were injured or lost relatives in the revolution queuing for hours to attend last month’s hearing.

“There were 700 people there and they couldn’t even give them a room where they could see the judge with their own eyes,” says Maries.

“They are still waiting for the truth. That queue is the best proof that Romanians still want justice.”

Donald Trump says virus will peak in US in next few days 06:36
Coronavirus: Boris Johnson in hospital for tests as symptoms persist 21:58
Coronavirus: Bodies of victims in Ecuador stored in containers 20:44
Queen Elizabeth invokes spirit of second World War in speech 20:41
Coronavirus pandemic deepens despair and danger for Europe’s Roma 19:40