‘People in Catalonia are among the freest in the world’ 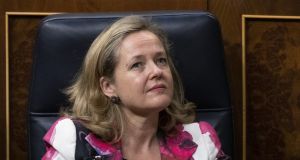 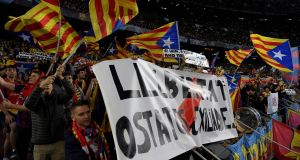 Spain’s acting Socialist government is pursuing a “moderate and proportionate” approach to the ongoing crisis in Catalonia, amid extremist behaviour from both unionists and secessionists, according to economy minister Nadia Calviño.

Calviño (51), a former director general for budget in the European Commission, has been one of the Spanish government’s most prominent voices on the Catalan issue in the international sphere.

“Moderation is a sign of strength and we are absolutely committed to keeping a moderate and proportionate approach, which means not falling into the hands of those who want to further destabilise the situation,” she told The Irish Times.

Calviño said that since the Socialist Party of Pedro Sánchez took office in June 2018, “we have been making a big effort to try to calm down the situation, to bring things onto a much more constructive track”. She cites a slight drop in support for Catalan independence – a July regional government poll showed that 44 per cent of Catalans backed secession, while 48 per cent opposed it – as evidence that this approach has had some positive effect.

However, relations between Madrid and the Catalan region hit a new nadir in the wake of an October 14th supreme court verdict jailing nine independence leaders for sedition. Hundreds of thousands of pro-independence Catalans have taken to the streets to protest against the decision since then, with a small minority using violence.

The political debate has been dominated by that violence lately, including the behaviour of the police, whom many accuse of using disproportionate force to quell the unrest. The Spanish government has defended the security force’s handling of the disturbances, but the Catalan president, Quim Torra, has opened an inquiry into the regional police, who are under his command.

Torra’s delayed and, as the Spanish government sees it, ambiguous condemnation of protesters’ use of violence has become an obstacle to the two sides sitting down to negotiate a solution to the crisis.

“[He] has not publically and unconditionally condemned violence, has not clearly supported the forces of law and order that have been behaving in a very proportionate manner in a very difficult environment,” said Calviño. “And, for the moment, he continues to represent only the minority of the Catalan population that wants secession from Spain. ”

She added: “We are not afraid of dialogue, we are not afraid of engagement. But it needs to be on the right basis, within the legal framework and with an interlocutor who represents the whole of Catalan society and clearly rejects violence.”

The minister said that if the Spanish and Catalan governments do eventually engage in talks, the latter’s longstanding demand of a binding referendum on independence will be off the table.

“We do not accept the idea of a unilateral referendum because it is not foreseen within our legislation and it would be bypassing the rights of the rest of Spain’s citizens,” she said. “The Spanish constitution is very clear that it is the whole of the Spanish citizenship that should decide on the future of the country.”

The Sánchez government advocates a federal and “pluri-national” territorial model, although the current tensions make any reforms in that area unlikely in the short term. The minister points out that Catalonia already has substantial devolved powers, including education, police and healthcare.

“It is very difficult to see what more margin [for further devolution] there is because there is already a very high degree of decentralisation in the Spanish political system, way beyond what one sees in other countries,” she said.

Since the unrest erupted last month, the political right has been urging Sánchez’s government to go the other way and temporarily restrict at least some of those powers. The Popular Party has called on him to trigger the National Security Law, which would put the Catalan police force under Madrid’s command. The Ciudadanos party, meanwhile, has called on Sánchez to introduce direct rule in the region, and the far-right Vox has demanded that a state of emergency be declared.

“When there’s fire on the streets one needs a fireman and not a pyromaniac,” said Calviño, warning that such measures are not helpful at the moment.

With a general election on Sunday, much of the campaign has focused on the Catalan issue. The Socialists are expected to win, although their ability to form a new government is in question, given Spain’s fragmented politics.

Calviño sees the political right’s stance as part of a broader polarisation, in which hard-line unionists and radical secessionists feed off each other. Vox, which has helped the other two parties on the right form local governments in Andalusia, Murcia and Madrid, is a particular beneficiary of this dynamic and has surged in polls recently.

“This whitewashing, this normalisation of the far right by the Popular Party and Ciudadanos has changed the political landscape in our country,” she said. “It is very difficult for me to understand why, instead of following the line of other European peers that normally reject forming governments or reaching agreements with extreme right-wing parties, in Spain this has not been the case.”

Secessionists have used the rise of the far right, as well as the supreme court trial, as ammunition with which to attack Spain’s democratic credentials in what has become an international PR battle between the independence movement and Madrid.

“Our democratic system is mature, our judicial system is up to the highest international standard . . . People in Catalonia have one of the highest degrees of freedom in the world,” said Calviño, countering such charges.

“[But the secessionists] have been portraying themselves as freedom fighters, instead of as a nationalistic, populist movement that wants to impose their views on the whole of the population of Catalonia, ignoring the rights of the majority of the Catalan population and the rest of Spain.”