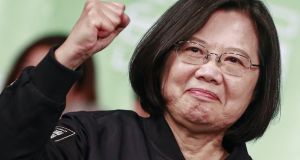 China accused Taiwan’s pro-independence president of deploying “dirty tactics” and intimidation on Sunday, following her landslide electoral victory that is seen as a stark rejection of Beijing’s unification desires.

President Tsai Ing-wen from the Democratic Progressive Party (DPP) was re-elected after picking up almost 8.2 million votes, or 57 per cent, in a contest that was dominated by questions of sovereignty, identity and the self-ruled island’s relationship with China.

Han Kuo-yu, her rival from the Kuomintang (KMT) party, which favours closer ties with China, ended up with a tally of 5.5 million votes or 38 per cent.

The DPP also held on to a majority in the legislature.

In reaction to the electoral results, China’s official news agency Xinhua accused Ms Tsai and her party of using “dirty tactics such as cheating, repression and intimidation to get votes, fully exposing their selfish, greedy and evil nature”.

The editorial warned that China had a full “policy toolbox” to curb moves towards independence.

“Anti-China political forces in the West openly intervened” in the election, it added, but the mainland and Taiwan’s reunification “cannot be stopped by any force or anyone”.

China’s foreign ministry said that Taiwan and the world should adhere to the “one-China principle”, which states there is only one China, which is ruled by the Communist Party in Beijing.

In response to the fact that the US, the UK and Japan among other countries had congratulated Ms Tsai on her election win, he said that “we deplore and firmly oppose… any forms of official ties between the Taiwan region and countries that have diplomatic relations with China”.

He said the foreign ministry had “lodged solemn representations” with the countries involved, and urged them to refrain from “sending any wrong signals”.

Taiwan, also known as the Republic of China, largely functions as an independent state, with its own constitution, military, elected government and currency. However, in 1971 Taiwan lost its United Nations seat following the world body’s recognition of the People’s Republic of China government in Beijing.

Chinese president Xi Jinping has said that reunification is “inevitable”, and has vowed to take back Taiwan, by force if necessary.

Beijing proposes using the same “one country, two systems” model that operates in Hong Kong to govern Taiwan, under which certain rights and freedoms can be retained that are not enjoyed on the mainland.

Ms Tsai has rejected those ideas, and in her campaign used the ongoing upheaval in Hong Kong as a prime reason why Taiwan’s 23 million people needed to forge an independent path.

In response to the mainland’s reaction following the election, the Mainland Affairs Council, Taiwan’s agency that handles cross-strait affairs, called on Beijing to respect the results and “return to the right path of benevolent interactions” between the two sides.

Taiwanese people “insist on democratic values and are adamantly opposed to the ‘one country, two systems’ model,” a spokesman said.

The election results showed Taiwan was a “mature and consolidated democracy”, and Beijing should “face the reality and abandon threats of force” against the island.

‘China is our worry’

In a Taipei bar on Sunday, a group of DPP supporters were celebrating, but, “as always” wondering what China would do next.

“As always, China is our worry. We want to do our own thing, but they have different ideas,” said Cindy Leung, a financial consultant.

“Pragmatism is the key, I think. Keep quietly developing our own nation, but don’t make them angry. And don’t make any big statements or declarations of independence.”

Taiwan does not permit proxy or postal voting, so many people who live in Hong Kong, mainland China or elsewhere flew back to vote, including Singapore-based Rosalind Chen.

“My plane was packed with voters. Not all supporting the DPP though, I guess. But enough of us came back. It was a record voter turnout and a massive win [for Ms Tsai and the DPP]. It was so worth it,”

Ranked as the 21st largest economy in the world, the island is doing well on the business front and some see that as a key cross-straits factor moving forward.

“The KMT and others always say we have to stay very close to China as that is where our economic futures lie,” said Lincoln Cheung, a banker.

“But recently we have kept up economic ties with the mainland, but worked hard to build others too. And, most importantly, many Taiwanese investors are coming back to Taiwan now and investing in Taiwan. Now Taiwan is booming. That gave people confidence to vote for [Ms] Tsai. That’s the future.”