Megxit: Markle should wield her wokeness where it matters - Buckingham Palace 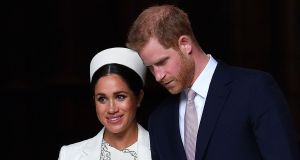 I never had much use for the queen. Maybe it’s the Irish in me. As Winston Churchill said: “We’ve always found the Irish a bit odd. They refuse to be English.” Or maybe it’s the American in me. We did go to an awful lot of trouble to break away from that corgi-and-gin-loving racket 244 years ago. At some visceral level, though, America must regret being torn away from the royal family. How else to explain our enduring fascination with dynasties? Having spent my career covering four dysfunctional political dynasties, I rebel more than ever at the idea that biology entitles you to authority.

The ghost of Diana gone rogue animates the fractured fairy tale of Meghan and Harry, and their intemperate attempt to upend centuries of starchy rules and break away from the Firm. Princess Di’s dangerous tango with the tabloids left Harry with no taste to play that game again, especially with streaks of racism against Markle added to the mix. He recently confessed that every click or flash of a camera brought memories of his mother’s death racing back into his mind.

I covered Diana’s first trip as the Princess of Wales to America in 1985. She seemed happy then, in that year before Charles resumed his relationship with Camilla Parker Bowles. She and the prince shared amused eye contact, winks and teasing remarks.

Nancy Reagan planned an evening of candlelit dancing at the White House worthy of a 24-year-old Cinderella in a midnight blue velvet gown. The first lady arranged for the Marine Band to play Night Fever as John Travolta spun a euphoric Diana around the floor. (“She’s a great little mover,” he said afterwards.)

It is hard to feel sorry for the Duchess of Sussex complaining that her diamonds are heavy. The pathos for Markle, trapped in a designer cage, goes only so far

I wondered how Prince Charles would deal with a young wife with so much star power, absorbing so much attention. We were all mesmerised when she tucked her chin down in that shy pose and cast that modest yet saucy look up at us. The answer was: he did not deal with it well. Twelve years later, when the unimaginable tragedy hit, the royal ice cubes were furious at the expectation that they should emote for the woman who had publicly ripped the monarchy as a bloodless, soulless gang and christened herself the Prisoner of Wales.

The Firm was out of its depth then, and it is again now. How can the queen and Prince Philip and Prince Charles possibly understand the desire of Meghan and Harry to rebrand as a Goopish lifestyle enterprise? The news that they have applied to trademark hundreds of items, from socks to hoodies, under the “Sussex Royal” logo makes Wallis Simpson’s exile in the Bahamas, spent matching the colour on the walls to her face powder, seem positively monastic.

Can you really call yourself “financially independent” when all you’re doing is cashing in on the royal name? Given the state of the world and the implosion of the British empire – with Scots once more contemplating an off ramp, Irish unity in play, Australia on fire and Boris Johnson tricking the queen into suspending parliament in a Brexit ploy – it is hard to feel sorry for the Duchess of Sussex complaining that her diamonds are heavy. The pathos for Markle, trapped in a designer cage, goes only so far.

It’s easy for royals to come to North America, where they are lavishly embraced as celebrities without all those pesky restrictions about class and role. (See The Crown episode about a wild, imbibing Princess Margaret charming LBJ.) Still, I think Meghan Markle should have wielded her wokeness where it is most needed – in Buckingham Palace. She could have channelled the Obamas, who did a magnificent job of rising above racist taunts and working within the institution to imprint a new image of racial possibility in America.

Markle had already successfully brought a refreshing dose of semi-radical chic to the royal family. Her visits to a mosque that housed Londoners displaced by the Grenfell Tower fire led to her putting out a 2018 cookbook, the proceeds of which went to the victims.

At its best, the monarchy has been able to lift up people, as it did during the blitz in the second World War. I saw that ability to alchemise emotions and opinions when I covered the queen on her visit to Ireland in 2011, the first by a British monarch in a century. It was impossible not to be impressed watching her speak Irish and offering regret about how Britain had made Ireland suffer, bowing her head at the scene of Bloody Sunday and the Garden of Remembrance, the sacred ground for slain Irish patriots.

What’s the rush to give up real influence to be an Instagram influencer? Besides, who unfollows their own grandmother?

The Irish started out sceptical, but by the end of her visit, many were calling her “Betty” on Twitter. The queen of England holds out the idea that she and her family should have some sort of vestigial moral authority. But with the Prince Andrew imbroglio in the seraglio of Jeffrey Epstein, and with Harry’s run for the Hollywood Hills, it is clear that many in her family are not interested in moral authority.

The collapse of the authority of the British monarchy mirrors the collapse of authorities generally, scarred by years of scandals about clergymen abusing children, athletes beating up girlfriends and university officials accepting bribes. And yet, even if the royals’ role in the culture is now akin to the Kardashians, it wasn’t cool for Meghan and Harry to pants the 93-year-old queen, defy her instructions, dump their Megxit plan on Instagram and intensify the sad split between the brothers. (If ever there was a time for some dry gin ...)

What’s the rush to give up real influence to be an Instagram influencer? Besides, who unfollows their own grandmother? – New York Times