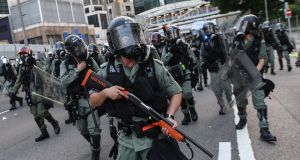 As more violence erupted in Hong Kong yesterday, protesters waved Union Jack flags and sang God Save the Queen and Rule Britannia outside the British consulate to demand the city’s former coloniser ensure China sticks to its pre-handover pledges.

“Downing Street, where is your dignity?” read one placard, while another declared that the “Sino-British Joint Declaration is Void”. The 1984 declaration lays out the “one country, two systems” formula that guarantees Hong Kong basic freedoms until 2047.

In defiance of a police ban, tens of thousands of demonstrators marched through sections of central Hong Kong yesterday afternoon, the latest rally in a series of increasingly violent protests that has convulsed the city for the past three months.

Some protesters threw bricks and petrol bombs outside the legislature, and the police responded with rubber bullets, pepper spray, tear gas and water cannon. The cannon fired water that had been dyed blue, which assists police to later identify the demonstrators as the dye is difficult to remove.

Several fights broke out as pro-democracy protesters clashed with supporters of the Beijing authorities. On Saturday, police said 25 people were hospitalised following a series of similar street brawls.

Outside the British consulate a protester said Britain had an obligation to defend its former colony as the situation was now “dangerous and dire”.

“They arranged the handover deal with China but they never asked the Hong Kong people what they thought before they left,” office worker Kathy Leung said. “Now China is ignoring their promises under that declaration. Britain must take action.”

In further efforts to generate international support, prominent activist Joshua Wong met the German foreign minister last week, and he is now in the United States to ask lawmakers to include a human rights clause in the ongoing trade negotiations with China.

Beijing insists Hong Kong is an internal matter and has frequently decried the “black hands” controlled by “hostile foreign forces” whom they blame for fomenting the unrest.

The mass protests were triggered by an extradition Bill that would have allowed suspects be sent to face trial in the Communist Party-controlled courts on the mainland. The Hong Kong authorities finally agreed to withdraw the proposed law recently, but by then the protesters had already widened their demands to include genuine direct elections, an independent investigation into the police’s use of force and a general amnesty for all protesters.

Almost 1,400 people have been arrested to date in connection with the protests, with many facing charges that potentially carry long prison terms.

The local economy, which was already struggling with the effects of the US-China trade war, is taking a big hit. The number of visitors to the city plunged 40 per cent in August, and a host of planned sporting, cultural and business events have been postponed or cancelled.

The protests are the biggest challenge to Beijing’s rule since the city was handed back by Britain in 1997, and they show no signs of abating. On Sunday night protesters were busy in online forums hatching plans for the next spate of rallies and strikes. In a move that will inevitably escalate tensions, they plan to place a particular focus on October 1st, the 70th anniversary of the founding of the People’s Republic of China, which is a particularly sensitive date for Beijing.