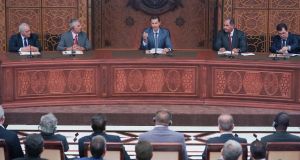 The leaders of Turkey, Russia and Iran are to meet on Monday to try to secure a lasting truce in northwest Syria following attacks there by the government that risk deepening regional turmoil and pushing a new wave of migrants towards Turkey.

The summit in Ankara, bringing together countries whose Syrian allies are combatants in a ruinous eight-year-old war, will focus on the Idlib region, the last remaining territory held by rebels seeking to overthrow president Bashar al-Assad.

Russian president Vladimir Putin and Iran’s Hassan Rouhani have backed Mr Assad against the rebels. Turkish president Recep Tayyip Erdogan, along with the US and European and Arab states, has supported different rebel factions in the conflict.

Mr Assad’s forces, aided by Russian air power, have regained control of most lands lost in the war. In recent months, Assad’s forces have attacked Idlib, where Syrian and foreign radical fighters hold sway alongside other, more moderate factions.

Under a deal with Moscow and Tehran two years ago, Turkey set up 12 military observation posts in northwest Syria aimed at reducing fighting between Mr Assad’s forces and rebels. The Turkish military posts have recently been caught in the crossfire due to the Syrian government offensive in the region.

In an interview with Reuters on Friday, Mr Erdogan warned that any Syrian government attack on the posts would draw retaliation from Turkish forces, possibly risking a direct confrontation between Ankara and Damascus.

“The moment that the regime messes with our observation posts, if there is any attack, then things will take a very different direction,” Mr Erdogan told Reuters. “We will not hold back like we are now. We will take any necessary steps.”

Mr Erdogan and Mr Putin agreed at talks in Moscow in August to “normalise” the situation in the region, after Syrian troops encircled rebels and a Turkish post in a move Ankara said threatened its national security.

While Mr Putin and Mr Erdogan have forged close ties over a range of issues like energy and defence co-operation, recent attacks by Syrian troops have also strained ties between Ankara and Moscow.

The fighting in northwestern Syria has also raised the risk of a new migrant wave towards Turkey, which currently hosts some 3.6 million Syrian refugees.

The UN has said that more than 500,000 people have been uprooted in the region since late April, most of them escaping deeper into the rebel bastion and towards the Turkish border.

While Mr Erdogan has said that Turkey could not handle such an influx of refugees, he has also previously threatened to “open the gates” for migrants trying to go to Europe unless Ankara receives more international support.

On Friday, Mr Erdogan reiterated his warning and said Monday’s summit would aim to stop the migration from Idlib and establish a ceasefire to prevent any further civilian casualties.

“The expectation here is not a momentary ceasefire. First, it is to put a stop to the migration here,” he told Reuters. “Second, to ensure a ceasefire here. Third, to seriously get terrorist organisations under control.”

“Turkey, which is hosting 3.6 million refugees in its home at the moment, cannot take the millions of people that will arrive from there,” Mr Erdogan said. “We cannot carry that weight.”

Mr Erdogan’s ruling AK Party suffered some stunning local election losses this year in part due to impatience among Turks over the Syrian refugees. Mr Erdogan has said 1 million refugees could return to a “safe zone” in northeast Syria which Turkey is trying to establish with the US.

Syrian troops shelled the south of Idlib on Sunday, according to rescuers and residents in the rebel stronghold where a ceasefire two weeks ago had halted a fierce army offensive.

On Monday, Mr Erdogan, Mr Putin and Mr Rouhani are expected to hold bilateral talks with each other before holding trilateral talks on the developments in Idlib. The three leaders will then hold a joint news conference.– Reuters