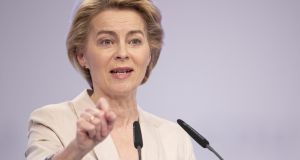 EU ambassadors on Friday gave formal approval to 27 names for the next European Commission. Their decision paves the way for the concluding vote by MEPs next Wednesday on the ratification of the Ursula von der Leyen commission, allowing the new executive to take up office on December 1st, a month after planned.

Britain’s nomination for that part of the term during which it remains a member of the EU is still awaited. The commission has threatened infringement proceedings for the UK’s failure to produce a name – a treaty obligation – and a deadline for responding passed on Friday. On Monday, proceedings are expected to be formally launched.

The ambassadors received legal advice from both commission and European Council legal services that the commission would be properly constituted at 27. Although the commission was coy about the content of that advice, a diplomatic source confirmed that: “Yes, it’s legally sound.”

There had been concern that the British refusal to name a commissioner, even if only for a couple of months, might jeopardise some decisions of the new commission legally.

On Thursday European Parliament president David Sassoli confirmed that MEPs had cleared all the substitute candidates for the commission on the basis of their parliamentary hearings last week. Ireland’s commissioner, Phil Hogan, has been given the trade portfolio.

Three nominees, from France, Hungary and Romania, had been rejected in the first round of hearings and their replacements met with approval although doubts were expressed about Hungarian Olivér Várhelyi for the enlargement brief, which will also involve supervision of rule-of-law progress in the western Balkans. Mr Várhelyi, a former ambassador to the EU, had made clear, however, that he is not a member of the ruling Fidesz party.

France’s Thiery Breton faced some criticism over his big business background. “If the vote is positive, on December 1st the European Commission will be able to start its own work,” Mr Sassoli said.

That vote will close what has been a particularly tetchy confirmation process, but one in which MEPs have successfully established new ground rules for the future in their long-running power struggle with the other institutions.

Although the relevant EU treaty gives parliament only the right to vote up or down the full list of commissioners as a block, MEPs have won the important right, politically anyway, to vet and reject each member of the new team.

The process was marked by a degree of deference to MEPs from the new commissioners and von der Leyen that reflects a significant shift on previous commissions.