Pro-democracy candidates win 85% support in local elections, up from 28% four years ago 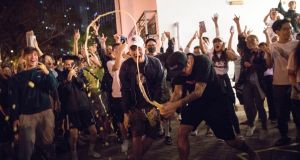 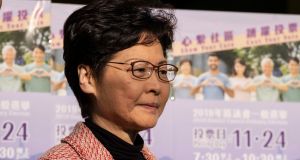 Hong Kong voters have delivered an astounding rebuke to the government and their handling of the ongoing protests, presenting the pro-democracy camp with an unprecedented landslide victory in local elections.

In the final tally, pro-democracy candidates and aligned independents won 388 seats – or 85 per cent of the vote – while pro-establishment parties managed only 60 seats.

Monday’s results stood in stark contrast to the last election four years ago, when pro-government candidates won 68 per cent of the seats, compared with 28 per cent for pro-democracy lawmakers.

The pro-democracy camp won control of 17 out of the city’s 18 district councils, only missing out on the 18-member Island district where eight seats are reserved for pre-establishment rural chiefs. Following the 2015 vote, all 18 councils were under pro-establishment control.

As early results rolled in, a group of teary-eyed, pro-democracy supporters outside a polling station in Mong Kok sang Glory to Hong Kong, the protest movement’s adopted anthem that has provided the soundtrack to the street protests in recent months.

“The voters have absolutely condemned [chief executive] Carrie Lam’s government,” said Camilla Ng, a campaigner for pro-democracy candidates. “They have brought legitimacy to our six months of protest. They are demanding the government listens to our core demands.”

Triggered by a now-withdrawn extradition Bill, the protesters are demanding the government stop characterising the protests as “riots”, and they are calling for an amnesty for the approximately 6,000 protesters arrested to date. They also want an independent commission to look into cases of alleged police brutality, and a fully democratic system introduced to elect members of the legislative council and the chief executive.

As violence escalated in the run-up to the vote, officials condemned the protesters and the pro-democratic faction, saying a “silent majority” in Hong Kong supported the government, were repulsed by the protests and wanted a return to peace and stability.

“This proves there is no so-called silent majority. Whether they are silent and at home, or noisy and on the streets, this election proves the huge majority of Hong Kong people reject the Chinese dictatorship. We do not want that system for Hong Kong, and we want a government that stands up for us in that fight against them,” said Edmund Tong, a 32-year-old insurance broker.

At the Star Ferry terminal in Tsim Sha Tsui, there were whelps of joy during the Monday morning commute as the latest results were shouted out.

Strangers hugged as the full extent of the staggering victory became apparent. Although the district councils only handle local matters, the elections were seen as a referendum on support either for the protest movement or the government’s handling of it.

“It is all just so emotional. So truly unbelievable,” 28-year-old Linda Yip said, an office worker in the financial district. “I don’t know how I can work today. I really don’t think I can.”

“And this vote also means young people’s blood and tears have not been wasted.”

The election passed off peacefully, as protesters came out to vote wearing anything but their trademark black. In online messages ahead of the poll, supporters were urged to not wear face-masks or black clothing, and to refrain from protesting or causing any disruptions while the vote was under way, for fear officials might call off the poll.

In a first order of business, pro-democracy councillors went to Polytechnic University on Monday afternoon to meet with the small number of protesters who are still holed up in the campus that has been surrounded by police for the past nine days.

More than 1,000 people have left the university since the siege began. While an unknown number escaped, more than 700 were arrested and about 300 minors had their details taken down for possible future legal action.

On Monday during a trip to Japan, China’s foreign minister Wang Yi did not mention the elections directly, but alluded to the situation by saying “no matter what happens, Hong Kong is a part of China . . . Any attempt to mess up Hong Kong, or even damage its prosperity and stability, will not succeed.”