Feelings of hope at dividing line between two Koreas 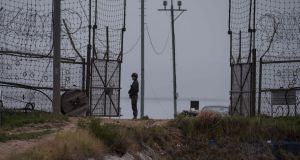 A soldier at an opening to the fence of the Demilitarised Zone (DMZ) during maintenance, on Gyodong, a tiny outlying island near the west of Seoul on May 9th. Photograph: Ed Jones/AFP/Getty Images

A veteran of the Korean War (1950-1953), wearing a baseball cap bearing the badge of his unit, walks slowly but with a straight back, close to the wreckage of a train carriage at Imjingak near the Demilitarised Zone (DMZ) dividing the Korean peninsula. He draws an imaginary line with his hand.

“We are all old comrades, soldiers who fought together,” he says, pointing to a group of elderly men. All wear the same caps, all walk with the same military gait.

The DMZ dividing South and North Korea is the most hostile border zone on the planet, and fears of armed conflict are rising over North Korea’s nuclear ambitions. His comrades-in-arms are looking across at a territory where North Korean border guards watch and wait. The 250km long, 4km wide buffer zone that runs from coast to coast across the peninsula suddenly seems like a very narrow strip indeed.

“We come here to have a look at this place, the line between the two Koreas. We fought together,” said the man, who gave the common Korean surname Kim as his name.

In South Korea, hopes of a peaceful resolution to the Korean nuclear crisis are pinned on another former soldier who was also stationed in the DMZ – South Korea’s newly installed president, Moon Jae-in.

After the confrontational approach of his predecessor Park Geun-hye, who has been impeached and is now in jail, Moon has pledged to use dialogue to defuse the North Korean nuclear crisis and use sanctions rather than force. He has signalled a willingness to go to Pyongyang to talk to the country’s leader, Kim Jong-un.

“It’s a beautiful place, here. It is so sad that our country is divided. I come here every day. Some day we will be one again,” said Kim, pointing to the intensively landmined area separating the two countries and the Bridge of Freedom, where nearly 13,000 prisoners of war were exchanged at the end of the Korean War.

The bridge is now a memorial site for separated families, plastered with ribbons, messages for missing family members in the North and Korean flags. Memorials and museums feel slightly odd, as the situation is still ongoing. There have been hundreds of casualties in sporadic skirmishes along the border, which effectively follows the 38th Parallel.

One post-war skirmish took place in nearby Panmunjeom, in 1976, when North Korean troops used axes to kill two American soldiers, who were cutting down a tree in the DMZ.

Moon was part of the special forces unit that went in to chop down the rest of the tree in a defiant show of force.

There is a memorial to the US soldiers lost on that day, two out of dozens of American troops killed in the DMZ since the armistice. No peace treaty was ever signed.

While this is a cold war frontier, it bears many of the hallmarks of a hotter conflict. All along the motorway to the DMZ, there are camouflaged guard posts lining the river. Stopping the car near the DMZ, you can look down towards the banks of the river to see various anti-invasion structures such as dragon’s teeth, what look like equipment dumps and dugouts covered in webbing. The barbed wire runs on endlessly.

Moon, whose remarkable career is best known for his time as a democracy activist, was eventually appointed chief of staff to former liberal president Roh Moo-hyun, who also tried to build bridges with North Korea by supplying aid and boosting economic ties.

The new president was a reluctant soldier, a conscript, but he served with distinction – and during the election campaign, his military experience added to his impressive credentials to lead.

In his inauguration speech, Moon said he was ready to do anything to resolve the crisis, and his message rang true with Koreans. Perhaps a new generation of veterans can bring real and lasting peace to Korea, and the museums and war memorials of the DMZ can become historical talking points rather than contemporary flashpoints.