When Trump asked for ‘loyalty’ at private dinner Comey ‘refused’

Sarah Huckabee, the deputy White House press secretary, answers questions from the media following the removal of James Comey as the head of the FBI. Video: The White House 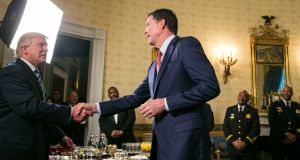 US president Donald Trump shaking hands with then FBI director James Comey during a reception at the White House in Washington on January 22nd. Photograph: Al Drago/The New York Times

Only seven days after Donald Trump was sworn in as president, James Comey has told associates, the FBI director was summoned to the White House for a one-on-one dinner with the new commander in chief. The conversation that night in January, Comey now believes, was a harbinger of his downfall this week as head of the FBI, according to two people who have heard his account of the dinner.

As they ate, the president and Comey made small talk about the election and the crowd sizes at Trump’s rallies. The president then turned the conversation to whether Comey would pledge his loyalty to him. Comey declined to make that pledge. Instead, Comey has recounted to others, he told Trump that he would always be honest with him, but that he was not “reliable” in the conventional political sense.

The White House says this account is not correct. And Trump, in an interview on Thursday with NBC, described a far different dinner conversation with Comey in which the director asked to have the meeting and the question of loyalty never came up. It was not clear whether he was talking about the same meal, but they are believed to have had only one dinner together.

By Comey’s account, his answer to Trump’s initial question apparently did not satisfy the president, the associates said. Later in the dinner, Trump again said to Comey that he needed his loyalty. Comey again replied that he would give him “honesty” and did not pledge his loyalty, according to the account of the conversation. But Trump pressed him on whether it would be “honest loyalty”.

“You will have that,” Comey told his associates he responded.

Throughout his career, Trump has made loyalty from the people who work for him a key priority, often discharging employees he considers insufficiently reliable. As described by the two people, the dinner offers a window into Trump’s approach to the presidency, through Comey’s eyes. A businessman and reality television star who never served in public office, Trump may not have understood that by tradition, FBI directors are not supposed to be political loyalists, which is why Congress in the 1970s passed a law giving them 10-year terms to make them independent of the president.

Dems have been complaining for months & months about Dir. Comey. Now that he has been fired they PRETEND to be aggrieved. Phony hypocrites!

Comey described details of his refusal to pledge his loyalty to Trump to several people close to him on the condition that they not discuss it publicly while he was FBI director. But now that Comey has been fired, they felt free to discuss it on the condition of anonymity.

A White House spokeswoman on Thursday disputed the description of the dinner by Comey’s associates. “We don’t believe this to be an accurate account,” said Sarah Huckabee Sanders, the deputy press secretary. “The integrity of our law enforcement agencies and their leadership is of the utmost importance to President Trump. He would never even suggest the expectation of personal loyalty, only loyalty to our country and its great people.”

At the dinner described by Trump in his interview with NBC, the conversation with Comey was quite different. Trump told NBC that Comey requested it to ask to keep his job. Trump said he asked the FBI director if he was under investigation, a question that legal experts called highly unusual if not improper. In Trump’s telling, Comey reassured him that he was not.

Trump did not say whether he asked Comey for his loyalty. Asked at Wednesday’s White House news briefing whether loyalty was a factor in picking a new FBI director, Sanders said Trump wanted someone who is “loyal to the justice system”. The dinner described by Comey’s associates came in the early days of Trump’s administration, as the FBI was investigating Russian meddling in the election and possible ties to Trump’s campaign. That investigation has since gained momentum as investigators have developed new evidence and leads.

Trump had met Comey for the first time in January, during the transition, when, along with the intelligence chiefs, the FBI director presented him with evidence of that intervention. Comey was tasked by his fellow intelligence directors to also pull Trump aside and inform him about a secret dossier suggesting that Russia might have collected compromising information about him.

The dinner at which the conversation Comey related took place was on January 27th, almost a month later. Comey’s associates said that the new president requested the dinner he described, and said that he was wary about attending because he did not want to appear too chummy with Trump, especially amid the Russia investigation. But Comey went because he did not believe he could turn down a meeting with the new president.

During the meal, according to the account of the two associates, Comey tried to explain to Trump how he saw his role as FBI director. Comey told Trump that the country would be best served by an independent FBI and justice department.

In announcing Comey’s dismissal on Tuesday, the White House released documents from the attorney general and the deputy attorney general that outlined why Comey should be fired. Trump said in the NBC interview, “Regardless of recommendation, I was going to fire Comey.”

“In fact, when I decided to just do it, I said to myself, I said, you know, this Russia thing with Trump and Russia is a made-up story,” Trump said.