North Rhine-Westphalia: the state that takes the pulse of Germany 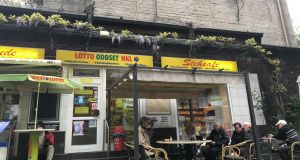 Like Voltaire’s naive hero Candide, the people of North Rhine-Westphalia (NRW) insist – stoically – that theirs is the best of all possible worlds. Germany’s most populous state, bordering Belgium and the Netherlands, has almost four times Ireland’s population in half the space.

A place of staggering contrasts, where the Ruhr industrial rust belt collides with Düsseldorf’s millionaire row, the region has half a dozen debt-choked cities in a massive urban sprawl yet still manages to contribute a fifth of German economic output. Everyone in Germany will be watching closely when 13 million voters here elect their next state parliament on Sunday.

The best place to get the pulse of the state is at one of its estimated 3,000 Trinkhalle. Equal parts kiosk, convenience store and drop-in centre, Duisburg’s Bunkerbude is perhaps the state’s most unique such establishment, open from 5am to 4am and set into a second World War bunker with weeping concrete walls.

Coffee-drinking locals defy the mid-morning chill and sit outside at a round table. In characters and conversation it’s like encountering a Samuel Beckett-Twin Peaks mash-up of absurd wit with a tinge of fatalist resignation.

“We don’t have any problems here in Duisburg,” says pensioner Eberhard, “not as long as we have the Bunkerbude.”

Duisburg is typical of the Ruhr region, its former industrial glory reduced to one steel factory with an uncertain future. Structural change has shuttered mines and shattered confidence: the city’s efforts to reinvent itself went spectacularly wrong in 2010, when an ill-planned Love Parade stampede claimed 21 lives.

Here at the Bunkerbude, regulars touch on all the big issues in Sunday’s election: strained public services, crumbling infrastructure and security worries. North Rhine-Westphalia took more refugees than elsewhere in Germany, but the welcome has cooled since hundreds of women in nearby Cologne were groped and assaulted by men, including asylum seekers, on New Year’s Eve 2015.

The crisis has abated somewhat since then, but the initial openness has turned to wariness. “Politicians can’t give us a perspective on where the refugee situation is going, and they squandered trust early on by telling us fairy tales,” says Ulrike, a Bunkerbude regular who volunteers at an asylum facility. “The politicians said we were getting German-speaking Syrian engineers, but what we got were scores of illiterate Afghans.”

Arriving by bicycle, fiftysomething Barbara is jubilant to have secured a new full-time job as a bookkeeper. Few of her friends are so lucky, she says, run ragged by trying to make ends meet with two or three part-time jobs with no benefits. Labour market liberalisation of a decade ago was good for employers’ wages bills but disastrous for millions of people here who slid from industrial job security into the precarious labour market.

“We have the Social Democrats [SPD] and [Gerhard] Schröder’s labour reforms to thank for that,” said Barbara, “and yet many people here still vote for the party, out of tradition I suppose.”

But even in the SPD’s traditional NRW heartland, patience is wearing thin. SPD premier Hannelore Kraft hopes to cling to power after seven years in NRW. This is an almost ungovernable state, with a Byzantine bureaucracy and self-governing cities and municipalities.

But in recent years Kraft’s government has come under sustained attack, over rising poverty, failing schools, spiralling crime rates and a series of Islamist security slips. “We have to fight harder than ever, and everyone’s motivated for that,” said Kraft, a 55-year-old leader with a common touch.

She is under extra pressure now: losing the SPD’s traditional industrial heartland would be the second state poll defeat in a week, a major setback for national SPD leader Martin Schulz.

Four months after he launched his campaign to unseat Chancellor Angela Merkel in September, the euphoric “Schulz effect” has flagged amid a dearth of policy detail and supporter uncertainty.

The conservative Frankfurter Allgemeine newspaper joked this week: “A crowd that enthuses over a fresh face and doesn’t know why switches quickly from ‘Hosanna’ to ‘crucify him’.”

A strong result for Merkel’s Christian Democratic Union (CDU), meanwhile, could return the party to power here in NRW but also lift the German leader’s hopes of scoring a fourth term in September.

Together with local candidate Armin Laschet, Merkel has pushed the CDU as the best answer to NRW’s school, security and traffic meltdown. “When you know how far it is from here to the moon, you can work out how many kilometres of traffic jams NRW has in a year,” said Merkel at an energetic rally in Bonn.

Just south of Duisburg, NRW’s wealthy state capital Düsseldorf is a world away. In the leafy villa-lined streets of the Oberkassel neighbourhood, Vietnamese woman Nguyen, one of the boat people 40 years ago, has watched closely the 2015 refugee crisis and local reaction.

“I’m a refugee myself but I sense people are no longer as worried about this,” she said, adding with a smile: “Now I am back to offering my usual free psychological consultations on their day-to-day problems.”

A key barometer of the refugee issue will be Sunday’s result for the Alternative für Deutschland (AfD). It has warned voters that high immigration here – of Sinti and Roma, and more recent arrivals – means NRW is “being lost, piece by piece”. But the AfD’s 8 per cent support in polls, while enough to enter its 13th state parliament on Sunday, is far from the double-digit results of last year’s state polls.

A regular in Nguyen’s kiosk is Irishman Paul Cahill, who came to Germany 31 years ago and now runs his own business in Düsseldorf.

As president of Germany’s Irish Business Network, Cahill is a passionate believer in closer ties between Ireland and his adoptive home. North Rhine-Westphalia is the heart of German business, home to a third of the country’s blue-chip countries and German-Irish business ties have a long and proud tradition here, going back to Irishman William Mulvany.

Born in Sandymount in 1806, Mulvany moved here in his 50s and opened his first mine – Hibernia – in 1855. With quick wits, iron will, and not a word of German, he built up coal mining empire that by his death in 1885 earned him the title “King of the Ruhr”.

“It was Mulvany that sparked a transfer of industrial technology and mining know-how to this region, without which Thyssen and Krupp couldn’t have happened in the same way,” said Cahill. “All these years later, in a post-Brexit world, Ireland should be looking here for new business opportunities like Mulvany did.”

Traces of Mulvany survive across the Ruhr region: street names, his summer villa, now a hotel, and the towering shaft in Herne over his third mine, still bearing the name he gave it: “Erin”.

Erin closed in 1983 but the model miner housing estates Mulvany brought to this region have survived, like the Teutoburgia settlement.

For local woman Käthe Malkus, now 88, this has been home for most of her life. Her father, brothers and children all worked in the Erin mine until it closed.

“Things have changed in this region beyond recognition and I’m not sure how much Sunday’s election will change things,” said Malkus. “But we’re mining folk and we stick it out, through thick and thin.”