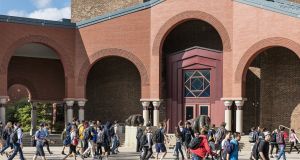 In August 2016 Jim Piazza and his wife Evelyn dropped off their two sons to Penn State University to start the new academic year. Six months later one of them was dead.

“A senseless and very preventable tragedy . . . caused us to bury our son three months ago,” the father of Timothy Piazza told a press conference on May 5th as 18 Penn State students were charged with crimes relating to their son’s death.

The case of Timothy Piazza, who died after he fell down a staircase after a night of excessive drinking, has renewed focus on the culture at American college campuses.

Piazza’s death on February 4th was initially ruled accidental. But an investigation by a grand jury has led to criminal charges, with eight of the 18 men charged with involuntary manslaughter and aggravated assault.

The picture that emerges from the detailed 70-page report published by the grand jury is harrowing, as it traces the events that led to the 19 year-old’s death.

Aided by video surveillance footage and text messages between some of those present, it recounts how Piazza and 12 other students began drinking in the early evening as part of a ritual initiation ceremony to mark their acceptance into the Beta Theta Pi fraternity, a national group with chapters in various universities.

After downing vodkas and beer, footage shows Piazza staggering to a couch at about 10.40pm, before heading towards a basement stairs at about 11pm.

A text sent by one of the fraternity members reveals that Piazza fell down the staircase. Later footage shows the victim lying on the couch as attempts are made to revive him, including putting a backpack full of books on his back to prevent him rolling on to his back, the report describes. Several times between 3am and 5am Piazza makes attempts to stand, at one stage hitting his head on an iron rail.

In a series of media interviews this week the attorney for the Piazza family was scathing in his criticism of the victim’s fellow students, accusing them of “grotesque actions” that were “beyond human decency”.

He said the family would consider releasing the video footage after the trial concludes, accusing those present of covering up evidence.

Penn State has since banned the Beta Theta Pi fraternity chapter, though the president admitted that it was difficult to police the problem when many fraternities owned their own properties.

The incident is the latest to highlight the dangers of “hazing” – the practice of forcing people to endure strenuous or humiliating acts as part of an initiation rite.

Although drinking societies are a feature of university life in some European countries, particularly the UK, the prevalence of fraternity and sonority groups is deeply rooted in American educational history and culture. It is not simply the preserve of the “frat boy” stereotype.

Up to 30 per cent of students at some universities are members of so-called Greek groups. While primarily a space for socialising and networking, many fraternities and sororities operate formal membership structures, focused around fraternity houses where students live together in a community.

In a high profile case in May 2015, 22 members of the well-known Pi Kappa Alpha fraternity at Northern Illinois University were prosecuted for their role in the death of freshman student David Bogenberger, who died after an initiation ceremony.

Penn State itself is already reeling from revelations of a cover-up over a child sex abuse scandal involving football coach Jerry Sandusky. Another fraternity group with a branch at the university, the Kappa Delta Rho, was investigated in 2015 for allegedly running a clandestine Facebook page showing photographs of nude, unconscious women.

There have been indications in recent years that prosecutors are taking a tougher line on initiation activities that lead to death and suffering, with more criminal charges now being brought. Colleges have also moved to close down fraternities and educate students about the dangers of pressurised drinking, particularly given that many of the students involved are below the legal drinking age.

With the Piazza case expected to go to trial later this year, the issue is likely to return to the public domain in the months to come.

For Jim and Evelyn Piazza, however, it is too late.