The US military’s Pacific command said on Saturday, January 13th that there was no ballistic missile threat to Hawaii after a message was sent in error to Hawaii residents’ mobile phones. 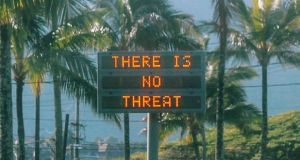 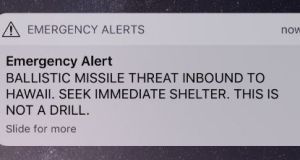 The message was sent in error to Hawaii residents’ mobile phones. Source: Twitter

The US military’s Pacific command said on Saturday there was no ballistic missile threat to Hawaii after a message was sent in error to Hawaii residents’ mobile phones.

A spokesman for the command said it “detected no ballistic missile threat to Hawaii” and that the message warning had been sent in error.

The error happened when someone hit the wrong button. “We made a mistake,” said Hawaii Emergency Management Agency administrator Vern Miyagi.

Residents in the state received emergency alerts on their mobile phones advising them to “seek immediate shelter” from an inbound ballistic missile.

“Hawaii - this is a false alarm,” Democrat Tulsi Gabbard said on Twitter. “I have confirmed with officials there is no incoming missile.”

The Hawaii Emergency Management Agency also said on its Twitter account that there is “NO missile threat to Hawaii.”

The episode came at a time of heightened tensions with North Korea, which has said that it has successfully tested ballistic missiles capable of reaching the United States.

Commander David Benham, a spokesman for the US Pacific Command, said in an emailed statement: “USPACOM has detected no ballistic missile threat to

Hawaii. Earlier message was sent in error. State of Hawaii will send out a correction message as soon as possible.”

US President Donald Trump was briefed following the incident. “The president has been briefed on the state of Hawaii’s emergency management exercise. This was purely a state exercise,” White House spokeswoman Lindsay Walters said.

The alert caused widespread panic on social media. “Waking up to an alert saying there was a missile heading towards Hawaii (while I’m in Hawaii) was honestly the scariest moment I have ever experienced,” one Twitter user wrote.