Deposed Catalan leader floats idea of being sworn in from Belgium 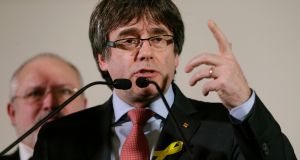 A plan by Carles Puigdemont to be sworn in as Catalan president while remaining in exile in Belgium has sparked a constitutional debate and underlines the uncharted nature of Spain’s ongoing political crisis.

The new Catalan parliament is scheduled to hold its first session next Wednesday, and the process of approving a regional leader is due to begin at the end of this month. Mr Puigdemont, who was removed from office in October and has been in self-imposed exile in Brussels since then, wants to return to the post.

A December regional election, called by Spanish prime minister Mariano Rajoy, gave pro-independence parties a narrow majority in the Catalan parliament. Mr Rajoy had introduced direct rule in the region following a unilateral declaration of independence by the regional parliament.

Mr Puigdemont’s electoral coalition, Together for Catalonia, reported earlier this week that it had the support of the Catalan Republican Left (ERC) to help him win an investiture vote. An arrest order is in place against him in Spain due to charges of rebellion, sedition and abuse of public funds. His former vice-president and the leader of ERC, Oriol Junqueras, is in prison in Madrid awaiting trial on similar charges.

Those two parties have been studying the possibility of the former president taking part in the investiture debate and ensuing vote via video link, although there are reports that the use of an ally to represent him physically in the parliament is a more favoured option.

This debate has drawn fierce criticism from unionists. “You can’t be president of Catalonia from Belgium, on the run from the justice system and with serious charges hanging over you, and much less so by doing an investiture vote via Skype or hologram,” said Inés Arrimadas, leader of the Ciudadanos party in the region.

In light of Mr Puigdemont’s mooted plan, focus has fallen on the exact wording of the law, which states that the candidate for the presidency must present his proposals for the new government “before the chamber”.

Marcel Mateu, a constitutional expert at Catalonia’s Open University, told El Diario newspaper that the law was vague enough to allow the candidate not to be present in the building.

However, several legal experts have spoken out against the idea, among them Francesc Pau i Vall, of Pompeu Fabra University, who asked: “If the candidate could choose to give his speech to the chamber via video link, could other deputies do the same?” He added: “Could the successfully sworn-in candidate then govern from Brussels via video link?”

If the pro-independence parties do decide to go ahead with this contentious plan, it is likely to face legal challenges from the Spanish government, which said on Thursday it would “guarantee that nobody twists the law in order to do something ridiculous”.

Meanwhile, the pro-independence parties must decide on their priorities for the coming legislature. On Tuesday, Artur Mas resigned as leader of Mr Puigdemont’s Catalan Democratic Party, sparking reports that he was unhappy at the unilateral manner of its attempts to break away from Spain in recent months.