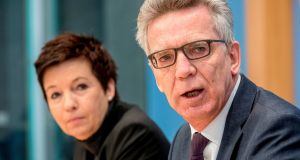 The peak of Germany’s 2015-2016 refugee crisis may have passed, but new figures make clear how much strain remains.

Almost 187,000 asylum applications were filed in Germany last year, according to data released on Tuesday, down almost 80 per cent from the peak of 890,000 two years ago and down a third on last year.

“The federal office for migration and refugees is no longer preoccupied with managing the crisis consequences,” said Thomas de Maizière, Germany’s acting federal interior minister. Now the agency had greater ability to “address the tasks of the future”, in particular integration.

The figures for 2017 show a quarter of new asylum applications came from Syrian citizens, the largest group, while 11 per cent came from Iraq, the second-largest. Mr de Maizière said authorities had last year refused applications for a record 60 people considered a danger to national security.

The asylum numbers show about one-fifth of applicants are granted refugee status under German constitutional law or the Geneva Convention, while 16 per cent are granted so-called secondary, subsidiary protection.

Opposition parties have accused the Merkel administration of playing politics with refugees, leaning on authorities to adopt a hardline approach to asylum applications.

According to separate figures released this week, nearly half of all appeals against a negative asylum application are successful.

Figures for the first nine months of 2017 suggest that 44 per cent of decisions to refuse asylum were overturned by courts. In the case of Syrians, who often fight refusals to allow them bring over their families, the successful appeals rate is 69 per cent.

In the same period in 2016, despite there being far more asylum cases in the system, the rate of successful appeals was 29 per cent. “Clearly in the agencies dealing with refugees, a culture has been imposed from the ministry heads: if in doubt, deport and deprive them of their rights,” said Katja Kipping, co-leader of the Left Party.

Germany’s migration authority disputes this and says a third of refused asylum cases succeed on appeal. Almost a quarter (23 per cent) of appeals are eventually decided in favour of the asylum applicant, with the remainder of cases not yet calculated.

Even as the number of new arrivals sinks, however, the mountain of work has shifted from the asylum agency to the courts.

In the eastern state of Brandenburg, neighbouring Berlin, administrative courts say that asylum appeals now comprise 60 per cent of the 18,000 new cases accepted last year, up from 50 per cent in 2016. Compared to 2015, the number of open cases in Brandenburg’s administration courts quadrupled.

In neighbouring Saxony, asylum appeals – the costs of which are covered by the German state – have tripled in number since 2015 and, last year, made up one in two cases at the administrative courts.

“We are working as hard as we can and still cannot manage everything,” said Birgitta Braun, president of Saxony’s administrative court, to the Leipziger Volkszeitung daily.

Refugee concerns – and increased controls – have not just played a dominant role in drawn-out discussions to form a new government in Berlin: they have also sparked a revolt in the centre-left Social Democratic Party (SPD).

On Sunday, party delegates vote on whether a preliminary agreement from last Friday is an acceptable basis to open coalition talks with Angela Merkel’s centre-right Christian Democratic (CDU/CSU) alliance.

SPD left-wingers, and its youth wing, are furious at an apparent migration cap of up to 220,000, and also at plans to extend a ban on allowing refugee family reunion. With the clock ticking, party leader Martin Schulz is touring the country to win support for the agreement – and his political future.