Chinese nursery chain ‘sorry’ after reports of children being drugged

Parents claim toddlers were molested, spiked with needles and drugged with pills 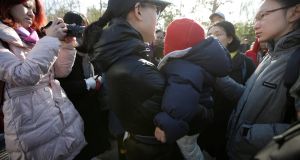 A parent is surrounded by members of the media outside the kindergarten run by pre-school operator RYB Education in Beijing, China. Photograph: Jason Lee/Reuters 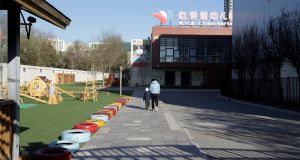 A child walks with a parent at the kindergarten run by pre-school operator RYB Education in Beijing, China. Photograph: Jason Lee/Reuters

Concerned and angry parents gathered around a kindergarten in Beijing on Friday where teachers are accused of abusing and molesting toddlers, including injecting them and feeding them pills.

China’s education ministry and the Beijing municipal schools authority have promised tougher regulation of the pre-school education sector, and tighter supervision of staff and management after the incidents.

The case has prompted widespread anger in China, where the dramatic expansion in the economy and the rise of the middle class has led to a boom in childcare, often with insufficient screening and oversight.

“All of society is going through post-traumatic stress disorder over this incident. I am shaking as I write these words. It’s like organised crime,” Tsinghua University therapist Li Songwei wrote on social media, while another commentator, Xiuluo, wrote: “I feel helpless, I feel angry.”

The kindergarten in the eastern suburb of Guanzhuang was run by the pre-school operator RYB Education, which was listed the New York stock exchange in September, and it operates 1,300 day care centres and 500 kindergartens in 300 cities across China.

The incidents were reported in two classes at the kindergarten, each with 25 children aged between two and six years old.

Three teachers at the Beijing kindergarten have been suspended, a local education official said.

The disturbing reports from Beijing came after a wave of reports of child abuse at Chinese day-care facilities. There are also occasional reports of paedophiles from overseas working at international schools in China because of oversight lapses.

Earlier this month, surveillance footage was released of a kindergarten run by the travel company Ctrip, which showed teachers slapping children and throwing them around, and force-feeding them wasabi, an extremely spicy horseradish sauce.

One mother told the Caixin website that she had found needle marks on her daughter’s arms, buttocks and forehead, and some parents speculated that the needles may have been used to discipline children.

“I just want to know why my child was pricked with a needle, and what was injected,” one parent told China National Radio.

In Chinese kindergartens, children take a lengthy afternoon nap and parents reported that their children had been given small white pills before going to sleep.

“Disobedient students were also forced to stand naked or were locked up in a dark room at the kindergarten,” another parent told Caixin.

RYB Education released a statement saying: “We apologise for the severe disturbance this matter has brought to parents and society. We are working with police to conduct a further investigation, and will stay in touch with relevant parties until the authorities announce the final results of their investigation.”

The company added that it had also reported to police some false accusations made against RYB.