US ridiculed for promoting coal at climate change talks 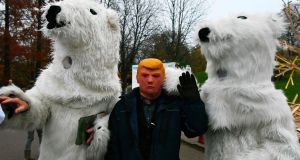 A man with a mask of US president Donald Trump during a performance created by Danish artist Jens Galschiot during the COP23 conference in Bonn. Photograph: Patrik Stollarz/AFP/Getty Images

The latest round of UN talks on the global response to climate change made steady progress on implementing the Paris Agreement. Participants from 195 countries showed determination to push on without the US, a major backer of the accord up to recently. But there is much unfinished business.

The US sent a small “rump delegation” to Bonn. White House officials hosted a shambolic event on “the role of cleaner and more efficient fossil fuels and nuclear power in climate mitigation” – with an emphasis on coal.

It prompted the UN climate envoy and former New York mayor Michael Bloomberg to remark: “Promoting coal at a climate summit is like promoting tobacco at a cancer summit.” It had a galvanising effect on almost all others present, while the high-level talks were bolstered by Syria and Nicaragua finally endorsing the 2015 agreement, ensuring the US was truly isolated on the world stage.

In the tricky final days of negotiation, senior American diplomat Judith G Garner said the US would remain engaged in global climate change negotiations, although planning to exit the Paris Agreement “at the earliest opportunity”.

COP23 was billed as an interim, largely technical round of talks to agree “the Paris rule book” to come into force in 2020. But the backdrop of a year of extreme weather events, further indications of a warming world and the throwing of an environmental scud into the room by Trump in June when he announced he was pulling the US out of Paris ensured the agenda was broadened.

Former Irish president Mary Robinson was a notable figure among delegations from developing states, NGOs and environmental groups trying to get heads of government and negotiators to be more ambitious in the period up to 2020.

Their case was that to have any hope of achieving a 1.5 degree limit to the rise in global temperatures this century, action was necessary immediately. Latest analysis from the Global Carbon Project charted greenhouse gas emissions rising in 2017 after three consecutive flat years. 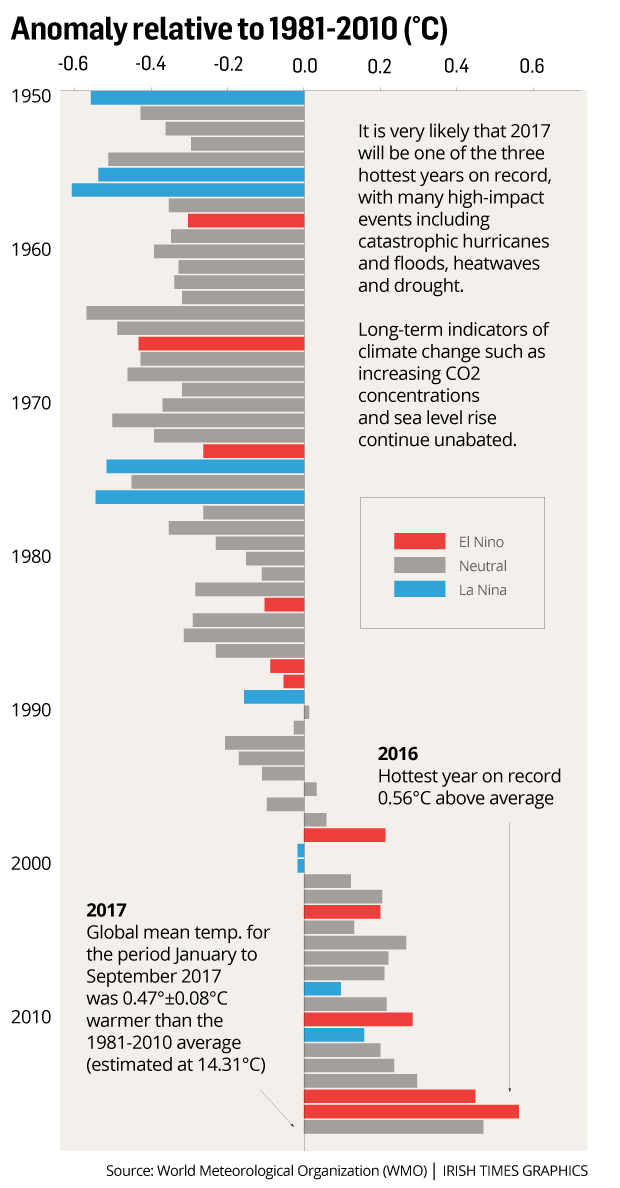 And so “pre-2020 actions” forced their way into discussions. A number of European countries agreed to accelerate emissions cuts even before 2020, when compliance targets begin to take effect. There is no indication that Ireland is in that vanguard.

The question of how to pay for problems relating to changes in climate already being experienced by many poor nations went unanswered again. While wealthier countries had previously promised $100 billion annually to vulnerable countries, there were indications of an awareness that this will not be enough.

Adoption of a gender action plan was “a major achievement as it recognises the critical role of women in climate action”, said Frank Bainimarama, prime minister of Fiji, which hosted COP23. A Local and Indigenous Peoples Platform was also put in place, ending years of stalling on both fronts.

The biggest advance was on the creation of a formal process under the Paris Agreement in which states and their leaders would regularly and publicly detail the efforts they were making to address climate change, pinpoint areas where they were falling short and push each other to do more.

The monitoring, reporting and verification of nationally determined contributions – states’ emissions-cutting pledges – will be critical to this process.

UN secretary general António Guterres cited signs of progress. Massive economies such as China and India are on track to surpass their Paris promises.

Talanoa, a Fijian concept in which people listen to each other and seek solutions that benefit everyone, was the hosts’ calling card. The Talanoa Dialogue has been added to the pre-2020 agenda to reflect a process of inclusion, process and transparent dialogue that will lead to the rule book being adopted at COP24 next year.

Minister for Climate Action Denis Naughten outlined Irish successes in reducing emissions across sectors such as renewable energy, food waste, dairy and even beef production, but the latest Climate Change Performance Index ranked Ireland as the worst-performing country in Europe when it comes to climate change action.

COP23 put down a big marker on how regions, cities and businesses are now “vital actors” in decarbonising the world. A total of 20 US states; 110 US cities, and more than 1,400 American businesses pledged in Bonn to ensure the US meets its commitment under the Paris Agreement even if the Trump administration pulls the US out.

Many other cities are accelerating the adoption of sustainable transport, and curtailing the use of fossil-fuelled vehicles with tighter deadlines than initially envisaged, although the absence of Irish cities on that list is striking.

The latest UN emissions gap report shows collective commitments under Paris are only about one-third of the level needed to keep global temperatures from increasing more than 2 degrees above pre-industrial levels. Currently, the world is on track for at least 3 degrees, which would bring catastrophic outcomes.