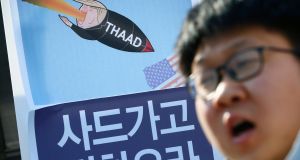 Chinese state media have called for a boycott of South Korean goods after a unit of the Lotte conglomerate approved a land deal to allow the deployment of the controversial US THAAD missile defence system.

The row comes at a turbulent time in East Asian geopolitics, after accusations that North Korea orchestrated the killing of its leader Kim Jong-un’s half-brother in Malaysia, and with gaping cracks in the once-solid bond between Beijing and Pyongyang.

With anxiety over North Korea on the rise, China’s top diplomat Yang Jiechi met US president Donald Trump in Washington for talks expected to lay the groundwork for an expected president-level meeting. While trade has dominated bilateral issues, the North Korean crisis has pushed itself to the top of the agenda.

Last year, South Korea decided to deploy the Terminal High Altitude Area Defence (THAAD) system to protect against North Korea’s missile programme, but Beijing believes the system is a threat to its security as the system can be used to penetrate Chinese territory.

“The THAAD installation is a mighty blow against strategic mutual trust between Beijing and Seoul, ” thundered an editorial in the state-owned Global Times newspaper.

“Ties will inevitably hit rock bottom, and this will be a loss for both sides. In the long run, China needs to get ready to confront Seoul, which is helping the US to stab us in the back,” it said.

The THAAD system is due to be deployed on land that is made up of a Lotte golf course in Seongju county and a state-owned military site in Gyeonggi near Seoul, and the board of Lotte International was due to sign the deal with the government on Tuesday.

“Showing Lotte the door will be an effective warning to all the other foreign forces that jeopardise China’s national interests. This is the dignity China should have as a major power,” the newspaper said.

While the paper does not directly reflect government opinion, it is published by the same group that publishes the Communist Party organ, People’s Daily, and is a useful bellwether of opinion within the party leadership.

The People’s Daily, on its WeChat social media account, said that cutting off diplomatic relations was even a possibility.

South Korean government officials have repeatedly said THAAD is a defensive measure against North Korean threats and does not target any other country, but China and Russia both disagree.

1 Transgender Cork farmer (65) surprised at positive response to telling her story
2 Bobby Storey: The IRA's planner and enforcer who stayed in the shadows
3 Q&A: How close are we to having a Covid-19 vaccine?
4 Unflappable ‘Dr Tony’ became public face of Covid-19 crisis response
5 Fianna Fáil’s return to power marred by appointments carve-up
Real news has value SUBSCRIBE