After his explosive first month, all eyes will be on the US president’s maiden address

In an interview with Fox and Friends on Fox News, President Donald Trump claims that his predecessor President Barack Obama, "is behind," demonstrations over the travel ban and national security leaks. Video: Fox News 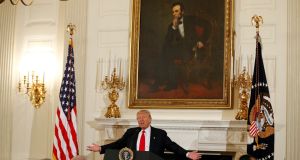 Donald Trump in the White House. The new US president will makes his first address to Congress on Tuesday. Photograph: Reuters/Kevin Lamarque

The hallowed halls of US Congress have witnessed plenty of drama in their time.

In 1890, a congressman from Kentucky was shot and killed by a journalist with whom he had a long-standing tetchy relationship. Traces of William Taulbee’s blood are still visible on the marble staircase in the House of Representatives.

Within the chamber itself, a bullet hole can be seen beneath the desk where the Republican speaker stands. In 1954, Puerto Rican nationalists smuggled guns in through the press entrance and attacked the chamber, wounding five representatives.

President Donald Trump’s Tuesday night address to the joint Houses of Congress may not be so dramatic, but the annual speech promises to be one of the most significant in modern times as Trump addresses congress after one of the most divisive US elections in living memory.

Technically, the occasion is not a State of the Union address, which is the annual speech delivered to congress by the sitting president.

Instead, Trump has been invited to to set out his plans for the presidency, as has been the case with previous presidents.

Thanks to the separation of powers enshrined in the US political system, the occasion will be one of few times Trump formally visits Congress.

The constitution stipulates that the president “shall from time to time give to the Congress Information of the State of the Union, and recommend to their Consideration such measures as he shall judge necessary and expedient”.

The speech comes a day after the White House unveiled its budget blueprint for next year.

A 10 per cent increase in military spending – a colossal $54 billion (€51 billion) – was the headline figure.

Though in line with Trump’s promise last week to deliver one of the “greatest military build-ups in American history”, the scale of the increase caught many by surprise, particularly given the expected cuts to the state department budget, a sign that the White House is championing militarism over diplomacy.

Cuts to other agencies, including the Environmental Protection Agency, are expected, though officials said that social security entitlements will be protected.

While only a budget estimate, any proposals must pass Congress and are likely to face resistance from Democrats as well as some Republicans.

Trump’s promise to “repeal and replace Obamacare” is also expected to feature in Tuesday’s speech, amid growing signs of divergence between the White House’s take on the future of healthcare and that of congressional Republicans.

Hundreds of protests took place over the weekend across the country in support of the Affordable Care Act.

And polls are showing an increase in support for Barack Obama’s signature healthcare plan, which brought millions of people into the health insurance net for the first time.

Trump met with senior health insurance executives on Monday and confirmed that healthcare reform will be prioritised by the administration ahead of tax reform. Legislators now want detail.

Having campaigned so vociferously against Obamacare, Republicans have now been left with the unenviable task of presenting a better option.

Other details that will be closely watched in Trump’s address will be any comments on his much-feted $1 trillion infrastructure plan, which has led to a sustained market rally since his inauguration but now risks running out of steam amid lack of specificities from Washington.

Quite apart from the content of Trump’s maiden speech to Congress, much of the focus will be on his demeanour and tone as he takes the stand in the historic building.

White House officials have said the address will strike an optimistic note – in contrast to his inauguration speech, which evoked a dystopian vision of the United States in decline.

Whether a more humble, inclusive president Trump will be evident as he makes the journey across Washington to Capitol Hill remains to be seen.

Going on past performance, it seems unlikely.