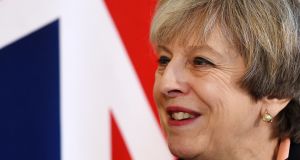 Theresa May: The British prime minister’s spokesman would not say if the government would attempt to stop another vote on Scottish independence. Photograph: EPA/Andy Rain/Pool 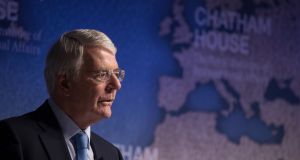 Theresa May’s government has rejected the case for a second referendum on Scottish independence but did not deny reports that Downing Street is preparing contingency plans for such a vote.

The pound fell on currency markets on Monday amid speculation that Scotland’s first minister, Nicola Sturgeon, would demand a second referendum as soon as the prime minister triggers article 50 of the Lisbon Treaty next month.

“There was a vote in 2014. The people of Scotland made a decision then to remain in the union, and all the evidence around at the moment suggests that Scotland does not want another referendum,” Ms May’s official spokesman said.

He would not say if the government would attempt to prevent a second referendum and did not comment on a report that the prime minister is ready to agree to a vote, but not until after Britain leaves the EU.

In the House of Lords on Monday, Northern Ireland minister Andrew Dunlop said the government would be “sensitive” in Brexit talks to the need to keep the Border open. Lord Dunlop was speaking during a debate on the Bill authorising Ms May to trigger article 50. He addressed a number of proposed amendments about Northern Ireland.

Peter Hain, the former Northern secretary, said reintroducing controls on the Border could do profound damage to the peace process. He said the open Border was politically totemic to nationalists and had become a symbol of the normalisation of relations between the two parts of Ireland.

“The government disturbs that at everyone’s great and grim peril,” he said. “And those who maintain that because the prime minister said she does not want to return to a hard Border then it won’t happen, should be aware that the Irish Government – which doesn’t want a hard Border either – has nevertheless, as a contingency measure, begun identifying possible locations for checkpoints along the Border with Northern Ireland in the event of a hard Brexit.”

“I don’t say that we’ll go back to the murder and mayhem of the Troubles,” Mr Hain added, “but I do insist that the process could so easily unravel. If the referendum means Brexit at any price, it may well be at a dangerously high cost for the Northern Ireland peace process.”

Lord Hain’s amendment called for a commitment to keep the Border open before article 50 is triggered. Another called for a guarantee that the 1949 Ireland Act, the 1998 Northern Ireland Act and the Belfast Agreement would not be affected by Brexit.

A third amendment said Brexit should not create an impediment to a united Ireland being part of the EU.

Also on Monday, former prime minister John Major also warned about the impact of Brexit on Northern Ireland, suggesting that a special deal was needed for the North. In a speech at the international affairs think tank Chatham House, he said the peace process was already fragile.

“Uncertainties over Border restrictions between Ulster and the Republic are a serious threat – to the UK, to the peace process, and for Ireland, North and South,” Mr Major said.