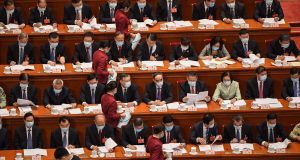 Hostesses serve tea to delegates during the opening session of the National People’s Congress at the Great Hall of the People in Beijing on Friday. Photograph: Leo Ramirez/AFP via Getty Images

China’s legislators unveiled a deeply controversial national security law on Friday aimed at tightening Beijing’s hold on Hong Kong, a move that sparked outrage among pro-democracy legislators and activists in the city.

The new law put forward at the annual National People’s Congress targets treason, secession, subversion and foreign infiltration, which Beijing has blamed for fuelling months of civil unrest in the financial hub.

The legislation also opens the door for China’s national security organs to set up operations in Hong Kong for the first time to improve the “enforcement mechanisms for safeguarding national security”.

Adopting a rarely used constitutional method, the central government will effectively bypass Hong Kong’s legislature and its elected representatives to enact the law, angering activists and rights groups in Hong Kong who predicted the move would trigger further unrest.

“It’s the end of ‘one country, two systems’,” pro-democracy lawmaker Dennis Kwok told a media briefing, referring to the policy that guarantees Hong Kong civil liberties and some legal, economic and financial independence from Beijing.

Activist Joshua Wong said the law was “a direct retaliation on Hongkongers’ efforts to arouse awareness over the past year. Beijing is attempting to silence critical voices with force and fear.”

Calling it “an ominous moment for human rights in the city”, Joshua Rosenzweig from Amnesty International said the move would likely bring further violence to the streets of Hong Kong.

“Beijing claims this law is designed to bring ‘stability’ to Hong Kong, but the past year of protests have shown that repressive laws will not slow unrest, but fuel it,” he said.

The move will also exacerbate already strained tensions between Washington and Beijing, with US president Donald Trump saying on Thursday that if Beijing enacted the law “we will address that issue very strongly”.

The last effort in 2003 to introduce similar national security laws was met with mass protests, forcing the local government to shelve the legislation.

Last year the city was convulsed with more than seven months of pro-democracy demonstrations that often descended into violence as activists and police clashed. The coronavirus outbreak forced a hiatus but as social distancing restrictions were lifted in recent weeks there has been a revival in protest activity.

Presenting the law to the congress on Friday, vice-chairman of the standing committee Wang Chen said the government needed to take powerful measures to stop and punish “anti-China” forces.

“Using Hong Kong to infiltrate and sabotage the mainland touches on our bottom line, it is absolutely not tolerable,” he said.

Addressing the 3,000 mask-wearing congress delegates at the opening ceremony, premier Li Keqiang declared China had achieved “a decisive victory” against coronavirus but added that “at present, and for some time to come, China will face challenges like never before”.

With huge financial uncertainty in the air the government abandoned its long-standing practice of setting an annual target for economic growth. As Beijing looks to reboot the economy amid a pandemic, he said they would continue to increase stimulus while seeking ways to boost employment and limit inflation.

The government said ir would also increase defence spending this year by 6.6 per cent to almost 1.3 trillion yuan (€163 billion). Beijing’s military budget is the second largest in the world but still lags far behind Washington, which allocated $738 billion (€676 billion) to this year’s defence spend.