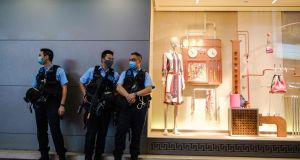 Hong Kong’s football fans make a loud habit of booing China’s national anthem before matches kick off. As a special administrative region under the “one country, two systems” model, the city can compete in sporting events as Hong Kong, but China’s March of the Volunteers is the anthem that comes out through the speakers before games.

It hasn’t tended to go down well in recent confrontational times and is usually greeted with a cacophonous and abusive response, but under proposed legislation anyone who doesn’t “stand and deport themselves respectfully” while it is playing, or who distorts or insults it in any way could find themselves sitting in a prison cell for three years.

Pro-Beijing lawmakers are intent on pushing ahead with the controversial national anthem law in a move that echoes their bid last year to fast-track extradition legislation, which would have opened the door to Hong Kongers facing trial in mainland Chinese courts.

For four months the city has been in pandemic lockdown mode and the streets have been calm, but in this period the government has struck a notably combative tone

In the face of intense opposition, legislators were forced to shelve the extradition Bill, but not before it sparked a mass pro-democracy movement that roiled the city with seven months of often violent clashes between protesters and police.

For the past four months the city has been in pandemic lockdown mode and the streets have been calm, but in this period the government has struck a notably combative tone and suggested that, moving ahead, its preferred form of defence will be attack.

A recent shuffle of officials has put noted hardliners in the top slots. Aside from the national anthem legislation, they say they will be overhauling the education system in a bid to produce more patriotic students, and have insisted a highly controversial national security law is also on their agenda – one critics say could be used to quell dissent and protest action.

Dubbing the protesters a “political virus”, Beijing’s liaison office then turned decades of legal precedence on its head by declaring it was not bound by the Basic Law, the city’s mini constitution, and had full authority to supervise and interfere in Hong Kong’s affairs.

The 1997 post-British handover law promises Hong Kong “a high degree of autonomy” for 50 years and states Beijing should not intervene in Hong Kong’s affairs except for defence or diplomatic matters. To the city’s pan-democrats, Beijing’s new interpretation amounts to a ripping up of the rule book.

Last month police swooped on the homes of 15 veteran leaders of the pro-democracy movement and arrested them for participating in unauthorised protests. Since last June more than 8,300 protesters have been arrested, about one-third of them secondary school students.

Protesters accuse the government of waging “lawfare” to prosecute them and block activists from running in elections, such as the legislative vote scheduled for September.

The divisive mood in the city is on full display in the legislature, where fist fights have broken out between the two camps and security guards have hauled pro-democracy politicians out of the chamber.

The “one country, two systems” framework has “collapsed on all fronts – legislative, judicial, education, free press and free speech”, pro-democracy lawmaker Claudia Mo told The Irish Times. “I used to say Hong Kong is experiencing the beginning of the end. Now the end is very near, if not already here.”

The protesters’ main demands are for fully democratic elections, the dropping of criminal charges against them and an independent inquiry into the police’s handling of the demonstrations.

Last Friday an official police watchdog group issued a report essentially exonerating the police from any allegations of brutality, a conclusion that incensed activists who called it a “whitewash”.

Looking ahead to another summer of protest, government officials say they are losing patience and will not tolerate any more violent, disruptive and “unpatriotic” behaviour.

For the protesters, every action the authorities take underscores their primary concern – that Hong Kong’s freedoms are being steadily eroded and the financial hub is quickly becoming just another mainland Chinese city under the cosh of the Communist Party.

“Beijing wants and needs total control over Hong Kong, at whatever cost, and that’s the sum and substance of it,” she said

The cycle of crackdown and resistance looks set to intensify. Just as restrictions on gatherings started to ease last week, riot police arrested 230 people who were joining flash-mob singing rallies in shopping centres.

The song of choice was what activists call the city’s real anthem, Glory to Hong Kong, a Cantonese march that has been adopted as the soundtrack of the protests and calls for “a revolution of our time”.

Given the protesters’ demands and China’s expectations, Mo suggests compromise will not be found. “Beijing wants and needs total control over Hong Kong, at whatever cost, and that’s the sum and substance of it,” she said.