Coronavirus: Spain to begin easing restrictions in Madrid and Barcelona 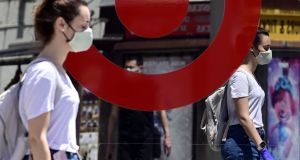 A woman wearing a mask and gloves walking in Madrid on Thursday as using masks became obligatory in public where social distancing is not possible. Photograph: Javier Soriano/AFP via Getty

Coronavirus lockdowns will be eased in Spain’s capital Madrid and second city Barcelona from Monday to allow outdoor dining and gatherings of up to 10 people as infections have slowed sufficiently there, the government said.

Restrictions will be relaxed even further in other regions comprising about half of Spain’s population.

Spain started phasing out one of Europe’s toughest lockdowns earlier this month, but full restrictions had remained in both Madrid and Barcelona because their outbreaks were so severe.

In Barcelona, beaches were opened for walking this week, but public swimming and sunbathing will remain banned.

“Each step we make, must be a safe one,” health minister Salvador Illa said. “Since the phase-out process is complex, I want to call for individual responsibility.”

Bars and restaurants in Madrid and Barcelona will be allowed to reopen on pavements and terraces at half capacity from Monday, churches can also throw open their doors again, and people will be free to travel outside the cities.

Other areas of Spain will move to another phase of the return to normality.

Theatres, cinemas, art galleries, museums can reopen there from Monday at no more than a third of capacity, some schools will restart, and some outdoor activities such as hunting and fishing will be allowed again.

Trips between provinces are still banned, however.

Though phasing out the lockdown, the government has imposed a 14-day self-quarantine on the few overseas travellers allowed in to try and avoid a second wave of COVID-19.

Meanwhile, Portugal’s doors are open to tourists, the country’s foreign minister Augusto Santos Silva said on Friday, one of the first European countries to welcome back visitors from elsewhere in the continent.

“Tourists are welcome in Portugal,” Mr Santos Silva told newspaper Observador, explaining that some health checks will be introduced at airports but there will be no compulsory quarantine for those flying in.

Portugal, which has so far recorded 30,200 confirmed Covid-19 cases and 1,289 deaths, is slowly easing restrictions in place since it locked down in mid-March.

It has been less affected than neighbouring Spain or Italy.

Many shops and restaurants in Portugal have already reopened under strict restrictions as part of an effort to revive the country’s export-oriented, tourism-dependent economy.

Flights to and from outside the European Union are still temporarily suspended until June 15th, with some exceptions, including some routes to and from Portuguese-speaking nations like Brazil.

The Spain-Portugal land border, which has been closed to tourists since March, will also remain shut until then.

As reopening from lockdown gets under way in much of Europe and Asia, the coronavirus pandemic has accelerated across Latin America, Russia and the Indian subcontinent. The virus has now infected over five million people across the world and killed over 333,000, according to a tally kept by Johns Hopkins University.

Russian president Vladimir Putin told officials on Friday to ramp up testing for coronavirus, but said Russia’s outbreak was stabilising even as the death toll rose by a record one-day amount.

Moscow’s Mayor Sergei Sobyanin has said he expects the toll to prove much higher in May than in April. It is still much lower than many European countries with fewer cases, something that has sparked debate, but which Russia defends.

Speaking at a televised government meeting by video link, Putin said there had been a gradual decrease in the number of new infections reported daily in recent days and that the situation “as a whole is stabilising”.

“At the same time it is very important this decline happens against the backdrop of a constant and significant rise in the number of tests,” he said.

Russia’s national virus data shows a steady decline in the number of reported cases, but the Kremlin’s critics and Russian media outlets have questioned the veracity of some of the figures.

A poll of 509 doctors on an app called the “Doctor’s Handbook” cited by the Meduza news website on Thursday found that more than a third of those surveyed had been ordered to attribute pneumonia deaths caused by COVID-19 to other causes.

The health ministry did not immediately respond to a request for comment on the report.

The country’s biggest daily jump in cases was registered on Friday, with some 6,000 new cases of the novel coronavirus announced.

The country of 1.3 billion people reported a total of over 118,000 confirmed cases on Friday, a roughly 5 per cent increase from Thursday’s figures. Included in the total are 3,583 deaths.

Prime Minister Narendra Modi has extended a lockdown, which started on March 25th, to May 31st, but relaxed rules in areas with lower numbers of cases and allowed state governments to issue their own guidelines on some matters.

India’s airlines will be allowed to resume flights with about a third of operations as of Monday, but only on domestic routes and under rules that are among the strictest in the world.

Coronavirus cases in Singapore topped 30,000 on Friday as the city-state reports hundreds of new infections in cramped migrant worker dormitories every day.

The lowly paid workers represented the vast majority of the 612 new cases reported on Friday, a daily infection rate that is one of the highest in Asia, taking Singapore’s total cases to 30,426. The death toll remains at 22.

Singapore closed schools and most workplaces in April as part of measures to curb infections.

This week, the government published plans for some businesses to resume at the beginning of June, given the low rate of infections outside the worker dormitories.

Businesses with less transmission risk like manufacturing and finance will be allowed to reopen, along with schools. Retail shops and restaurants will remain closed.

The country has reported 20 new coronavirus cases, including nine in the Seoul metropolitan area, as authorities scramble to stem transmissions while proceeding with a phased reopening of schools.

The figures announced by the Korea Centres for Disease Control and Prevention brought national totals to 11,142 cases and 264 deaths with nine other new cases were linked to international arrivals.

South Korea was reporting around 500 new cases a day in early March but has since managed to stabilise infections with aggressive tracing and testing. Officials have eased social distancing measures and began reopening schools, starting with high school seniors on Wednesday.

But students at dozens of schools in Incheon, near Seoul, were sent back home when some tested positive after visiting a karaoke room or taking private classes from a virus carrier.

More than 4,300 recovering coronavirus patients were sent to New York’s already vulnerable nursing homes under a controversial state directive that was ultimately scrapped amid criticisms it was accelerating the nation’s deadliest outbreaks, according to a count by The Associated Press.

The tally found out how many Covid-19 patients were discharged from hospitals to nursing homes under the March 25th directive after New York’s Health Department declined to release its internal survey conducted two weeks ago.

It says it is still verifying data that was incomplete.

Whatever the full number, nursing home administrators, residents’ advocates and relatives say it has added up to a big and indefensible problem for facilities that even Governor Andrew Cuomo, the main proponent of the policy, called “the optimum feeding ground for this virus”.

The Australian government has extended its ban on cruise ship visits for three months until September 17th in response to the coronavirus pandemic.

Australian Border Force announced the extension of the ban, which has been in place since March 27th when there were 28 cruise ships in Australian waters.

Any cruise ship capable of carrying more than 100 passengers is prohibited from operating cruises in the country.

Outbreaks linked to cruise ships and aged care homes have proven the most deadly in Australia.

Coronavirus: UK deaths surpass 50,000 as Italians allowed travel to other regions 13:15
Mumbai escapes brunt of cyclone after winds change direction 12:55
Sweden should have done more to combat coronavirus, health chief says 10:51
Pope Francis condemns racism and street violence in US 10:20
Trudeau lost for words when asked about clearing of protesters for Trump photo 09:55

1 Sweden should have done more to combat coronavirus, health chief says
2 Luke ‘Ming’ Flanagan bares his bottom half to European Parliament
3 With Lincoln looking on, the crowd dropped to their knees as 7pm approached
4 Coronavirus: 25% of new cases arising in the community with no known link to other cases
5 Co Mayo community grieves for Ben Duffy (5) after Lough Mask tragedy
Real news has value SUBSCRIBE