Coronavirus: Spain to seek to extend state of emergency 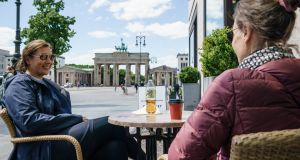 Two passers-by sit outside a bakery with drinks during a break in front of the Brandenburg Gate in Berlin, Germany, on Friday. Photograph: Clemens Bilan/EPA

There are now 4,543,297 cases of coronavirus worldwide with 307,705 deaths reported, according to data from Johns Hopkins University on Saturday. The figures are likely to represent a significant underestimate of the true scale of the Covid-19 pandemic.

The following is a round-up of some of the latest developments around the world:

India’s total number of coronavirus infection cases surpassed that of China when the Indian health ministry on Saturday reported a new total of 85,940, with 2,752 deaths. In total, China has reported 4,633 deaths among 82,933 cases since the virus was first detected late last year in the central city of Wuhan. The worst-hit Indian states are Maharashtra with 29,100 cases, Tamil Nadu with 10,108, Gujarat with 9,931 and Delhi with 8,895. Prime minister Narendra Modi’s government is due to announce this weekend a decision on whether to extend the country’s 54-day lockdown. Early this month, India started gradually easing the restrictions to resume economic activity by allowing neighbourhood shops to reopen and manufacturing and farming to resume. It has also resumed a limited train service across the country to help stranded migrant workers, students and tourists.

The number of deaths involving Covid-19 in the UK has now passed 41,500, according to the latest available data.

Together these figures mean that so far 38,856 deaths have been registered in the UK where Covid-19 was mentioned on the death certificate, including suspected cases.

A further 2,676 hospital patients in England who had tested positive for Covid-19 died between May 2nd and May 15th, according to figures published on Saturday by NHS England – which, together with the total figure of 38,856 registered deaths, indicates the overall death toll for the UK has now passed 41,500.

Russia reported 9,200 new confirmed cases of coronavirus on Saturday, with 119 deaths over the last 24 hours. The latter figure is the highest daily figure of new deaths the country has recorded so far. Russia’s coronavirus taskforce said the overall number of cases nationwide stood at 272,043. The country’s official death toll from the virus now stands at 2,537.

On Saturday Italy recorded its lowest number of deaths in a 24-hour period since early in its coronavirus lockdown, at just 153. That brings its total death toll in the pandemic to 31,763, the Italian civil protection agency reported. The last time the daily death count was that low was March 9th, the day after the nationwide lockdown was announced. The number of confirmed new infections rose by 875 for a total of 224,760 confirmed cases, while the number of people currently infected dropped to just more than 70,000.

Some Italian businesses will reopen on May 18th, but the government’s latest statement stopped short of allowing social gatherings.

Spain’s government will seek to extend its coronavirus state of emergency for the last time until late June, prime minister Pedro Sánchez said, as the country’s daily death toll reached a near eight-week low.

In Madrid on Friday the government hailed large-scale population testing as a key tool in the fight against coronavirus. It has warned that any premature relaxation of restrictions could have “enormous consequences”, given that only 5 per cent of Spaniards have had the virus.

French health authorities reported 96 new coronavirus deaths on Saturday, as the country eases from a two-month lockdown. In a statement, the health ministry said the figure had fallen slightly from the 104 new fatalities on Friday. This brings France’s total death toll to 27,625, the fourth-highest such tally in the world, after the US, the UK, and Italy, and just ahead of Spain.

The ministry said the number of people in hospital had fallen to 19,432 from 19,861 on Friday and the number of people in intensive care had dropped to 2,132 from 2,203 on Friday. Both tallies – key indicators for the French health system’s ability to cope with the epidemic – have been on a downtrend for four to five weeks and peaked at more than 32,000 and more than 7,000 respectively in early to mid-April.

Public beaches have reopened under strict social distancing measures as the nation endures a heatwave which has seen temperatures soar well above 30 degrees Celsius.

Easing beach restrictions is seen as key to salvaging the tourism industry over the summer in a country expected to have the worst recession in the EU as a result of the pandemic. On Saturday, swimming and sun loungers were permitted but there could be no group sports or food operations. The government issued strict beach guidelines, with beach businesses facing fines of up €20,000 and a three-month closure for violations. The number of beachgoers cannot exceed 40 people per 10,764sq ft, and beach umbrellas must be 5ft apart to encourage sunbathers to avoid others. The distance between groups must be 13ft. The government is considering opening bars and restaurants on May 25th.

Austria’s borders with the Czech Republic, Slovakia and Hungary will fully reopen on June 15th, the Austrian interior ministry said on Saturday, extending an easing of border controls to its eastern neighbours previously agreed with many of its neighbours to the west. The announcement follows a previously coordinated step to fully remove barriers on travel between Germany, Austria, Switzerland and Liechtenstein from June 15th onwards and ease restrictions on who is allowed transit in the meantime. Restrictions remain in place for transit from Italy. The EU on Wednesday pushed to reopen internal borders and restart travel, but recommended Europe’s external borders remain closed for most travel at least until mid-June.

The number of confirmed coronavirus cases in Germany increased by 620 to 173,772, data from the Robert Koch Institute (RKI) for infectious diseases showed on Saturday. The reported death toll rose by 57 to 7,881, the tally showed.

German finance minister Olaf Scholz is working on an aid package worth € 57 billion to help municipalities cope with a plunge in tax revenues caused by the coronavirus crisis, a finance ministry document showed on Saturday.

Restaurants in Germany reopened for the first time in two months on Friday. Berlin’s restaurants, cafes and snack kiosks were allowed to serve customers again, so long as they obeyed physical distancing. People from two separate households could share a table, but had to keep a distance of 1.5m from each other. Under new rules, waiting staff are required to wear face coverings. Cooks and other kitchen staff are not. Diners are also recommended to wear masks, but these are not compulsory – unless you use the toilet. Buffets are banned and food has to be cooked on the premises.

Borussia Dortmund thrashed traditional rivals Schalke 4-0 on Saturday as the Bundesliga restarted after a two-month break caused by the coronavirus pandemic. The match played with no spectators present.

On Friday, Slovenia proclaimed an end to its coronavirus epidemic. EU citizens can now enter freely, but non-EU travellers have to go through quarantine procedures.

The Baltic states of Lithuania, Latvia and Estonia have opened their borders to each other to create a “mini Schengen area”. Free movement of people will be restored to all 6 million permanent residents of the Baltic states, but arrivals from outside the three countries will have to undergo a two-week quarantine period. The easing of lockdowns is in response to sinking national death rates. Meanwhile, nearby Denmark reported zero deaths from the virus on Friday for the first time since March

Struggling to curb the spread of the coronavirus while the rest of Australia has begun relaxing a two-month lockdown, Victoria state on Saturday reported 11 new cases, including some linked to known clusters at a meat factory and a McDonald’s restaurant.

For the first weekend since mid-March, restaurants, cafes and bars were reopening in most parts of Australia, but Victoria retained most of its lockdown measures. The northeast state of Queensland, where just one new case was reported on Saturday, allowed restaurants, cafes and beauty salons to reopen, and groups of 10 people to meet for recreational purposes in parks, at playgrounds or for barbecues. Australia has recorded just in excess of 7,000 coronavirus cases, including 98 deaths, significantly below levels reported in North America and Europe, but health officials continued to urge vigilance and encouraged people to stay home.

The US House of Representatives has narrowly approved a $3 trillion Bill crafted by Democrats to provide more aid for battling coronavirus and stimulating a faltering economy. But Republican leaders, who control the Senate, and president Donald Trump have vowed to block it, despite some Republican support for provisions aimed at helping state and local governments.

Meanwhile, Mr Trump has announced details of a “warp-speed” effort to create a coronavirus vaccine by the end of the year, even as experts warn that such a breakthrough could take longer than 18 months. During remarks in the White House Rose Garden on Friday that had to compete with honking from protesting truck drivers, the US president also urged schools to reopen in the autumn and insisted: “Vaccine or no vaccine, we’re back.”

Mr Trump has also said his administration was considering numerous proposals about the World Health Organisation, including one in which Washington would pay about 10 per cent of its former level of funding for the organisation.

New York governor Andrew Cuomo said on Saturday the state’s new confirmed Covid-19 cases are predominantly coming from people who left their homes to go shop, exercise or socialise and not from essential workers.

An Associated Press analysis found 41 of the nation’s 50 states fall short of the Covid-19 testing levels that experts say are necessary to avoid another wave of outbreaks, even as some of those states move aggressively to allow businesses to reopen.

In South Korea, which has one of the highest levels of testing for the virus, a health ministry spokesman said on Saturday that the country may have dodged a major outbreak after finding 162 cases linked to clubgoers in Seoul, the densely populated capital. Son Young-rae said 46,000 people have been tested in the club-related outbreak. “It’s notable there were no new transmissions in churches, call centres and gyms where virus carriers went to,” he said, adding that is a sign facilities and businesses are practising proper hygiene and enforcing distance between people.

China is shortening its annual legislative session, which begins next week in Beijing, as small clusters of Covid-19 cases pop up elsewhere in the country. The spread of the disease has largely stopped in the country where the pandemic started, but Jilin province in the northeast has reported 28 cases over nine days, the latest two on Friday.

Brazil lost its second health minister in a month on Friday after president Jair Bolsonaro demanded wider use of unproven anti-malarial drugs to fight the coronavirus outbreak, adding to turmoil in one of the pandemic’s worst global hotspots. The country confirmed 15,305 new cases of the novel coronavirus on Friday, a record for a 24-hour period, as well as 824 virus-related deaths, according to data from the health ministry. Brazil has registered 218,223 confirmed coronavirus cases since the start of the pandemic and 14,817 deaths. –Reuters, PA, Bloomberg, Guardian