China launches first mission to the dark side of the moon 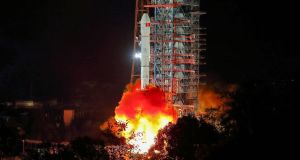 China has launched a daring space mission to boldly go where no one has gone before by landing a lunar probe on the dark side of the moon.

A Long March-3B rocket, carrying a lunar lander and a rover, blasted off from the Xichang satellite launch centre in the southwestern province of Sichuan in the early hours of Saturday, the Xinhua news agency reported.

Chang’e 4, named for the goddess of the moon in Chinese mythology, will explore both above and below the lunar surface after it arrives at the South Pole-Aitken basin’s Von Karman crater following a 27-day journey.

”The soft landing and exploration of the far side, which has never been done before, will gain first-hand information about the terrain and lunar soil components and other scientific data, which will help enrich our understanding of the moon and the universe,” Zhang He, executive director of the Chang’e 4 project, told Xinhua.

The landing is expected in early January, when Chang’e 4 will touch down on the cratered terrain of the lunar far side, the China National Space Administration (CNSA) said.

China hopes to be the first country to make a soft landing, where a spacecraft lands without incurring serious damage, and the mission underlines China’s ambition to become a space power to rival the US, Russia and the EU.

The moon’s far side is known as the dark side not because it is dark but because it faces away from Earth and remains relatively unknown. The dark side has a different composition than the near side, with a thicker crust and it is more heavily cratered.

Among the tasks the Chang’e 4 will carry out are surveying the terrain and land forms, and detecting mineral composition and surface structure.

Scientists have long discussed the possibility of building observatories on the dark side, which allow astronomers to observe deep space free from interference by the Earth’s atmosphere, and the lander will perform radio-astronomical studies on the mission. It may also carry plant seeds and silkworm eggs, according to Xinhua.

The moon blocks radio signals, so to allow communication between controllers on Earth and the Chang’e 4 mission, China launched a relay satellite named Queqiao, or “Magpie Bridge,” after an ancient Chinese folk tale, back in May.

Scientists from Netherlands, Germany, Sweden and Saudi Arabia developed payloads for the mission, while three scientific and technological experiments designed by Chinese universities will also be carried out during the mission. China conducted its first crewed space mission in 2003, becoming only the third country after Russia and the US to do so.

It landed the Yutu, or “Jade Rabbit,” rover on the moon five years ago and plans to send its Chang’e 5 probe there next year and have it return to Earth with samples. A crewed mission to the moon is also being considered.

China has put two space stations into orbit, one of which is still operating to prepare for a 60-ton station that is due to come online in 2022. The launch of a Mars rover is planned for the middle of the 2020s.