Argentina's President Mauricio Macri was left alone on stage on Friday (November 30), amid a misunderstanding with US President Donald Trump which saw the American walk away during a photograph opportunity. 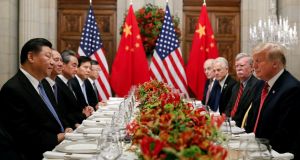 Donald Trump arrived back to Washington on Sunday from the G20 summit in Argentina claiming trade victories for the United States after he agreed to defer threatened tariffs on Chinese goods.

Mr Trump and Chinese president Xi Jinping agreed on Saturday to a temporary trade ceasefire to allow time for more negotiations. The breakthrough means that planned tariffs on $200 billion worth of Chinese goods will not rise to 25 per cent in January as had been planned.

The US president also hailed a new trade deal signed with Canada and Mexico at the summit. The USMCA deal – a revamped version of Nafta, the North Atlantic Free Trade Agreement introduced under Bill Clinton’s presidency – was signed by the three leaders at the G20. But it still needs to be ratified by national parliaments.

Mr Trump warned Congress that it should pass the deal. Nafta has been “a disaster for the United States”, he said on Air Force One on his way back to Washington.

“It’s caused us tremendous amounts of unemployment and loss and company loss and everything else. That’ll be terminated. And so Congress will have a choice of the USMCA or pre-Nafta, which worked very well.”

As part of the trade discussions with China over the weekend, Beijing agreed to purchase an unspecified amount of American farm, energy and industrial goods in order to reduce the trade gap between the two countries.

Congress is facing a possible government shutdown on Friday if several spending Bills are not passed in the coming days. The White House was said to be considering allowing a temporary one-week budget Bill that would allow the federal government to keep running as Washington prepares to hold several memorials for the late George HW Bush this week.

In particular, Congress looks set for a battle about funding for Mr Trump’s proposed wall on the Mexican border. The US president is seeking $5 billion in funding, but Democrats are unlikely to back his demands unless they secure something in exchange, such as a deal for “dreamers” – young people who arrived in the United States illegally as children. Although Republicans hold a small majority in the Senate, Democrats can still block spending bills, as those measures need 60 votes in the 100-member chamber to pass.

Meanwhile former FBI director James Comey, who was fired by Mr Trump last year, confirmed that he would testify before the House judiciary committee on Friday. Mr Comey had resisted testifying in private, calling for a public hearing instead. But having filed a lawsuit on the matter last week, Mr Comey will now testify in private, but a transcript of his testimony will be made available afterwards. “This is the closest I can get to public testimony,” he said on Twitter.