Focus on attention-grabbing such as statues rather than domestic ills, critics say 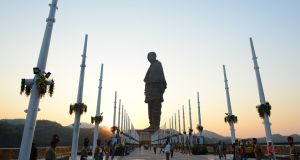 The “Statue Of Unity”, the world’s tallest statue, in India’s western Gujarat state: On the Life Expectancy Index, India is ranked 163rd of 224 countries, while the Global Hunger Index ranks it 103rd of 119. Photograph: Sam Panthaky/AFP

Almost all of them have endeavoured to project India as a global power, but in doing so they have wilfully ignored the myriad domestic economic, environmental, educational, social and medical shortcomings that render daily existence for the ordinary Indian nightmarish.

Much hope was pinned on prime minister Narendra Modi’s Hindu nationalist Bharatiya Janata Party (BJP) government that assumed office in May 2014 after an impressive victory at the hustings.

In the run-up to the elections it projected itself as different, promised frugality, moderation and above all achhe din or good days to the people, following a decade of venal Congress Party-led rule.

The vast Indian Rail network is beset by obsolescence, corruption and frequent accidents

But over the past four years Modi’s government too has proved no different than its predecessors, succumbing to populism and erring on the side of extravagance and grandiosity while overlooking India’s stark realities.

Modi’s most recent indulgence was the inauguration of the world’s tallest statue.

Patel’s statue, however, will be overshadowed by that of Shivaji, the 17th-century Hindu warrior king that is being built off the Mumbai coast to a height of 210m – up from the 192m planned earlier – at a cost of €561 million. Modi laid its foundation stone in December 2016 and it is scheduled for completion by 2020.

And if such profligacies were not enough, Modi in his Independence Day address in August declared that India would send a “son or daughter of India” into space by 2022 to celebrate 75 years of freedom.

“This government and its predecessors have failed ordinary Indians, year after year,” declared columnist Kanti Bajpai. “It is laughable to talk about a rising India given our sad scabrous state.”

India is a competent event manager, capable of undertaking short-term projects, but incapable of sustaining any long-term developmental ventures

On the Life Expectancy Index, it is ranked 163rd out of 224 countries, while the Global Hunger Index ranks it 103rd of 119 countries. In 2017, India recorded the highest number of malnutrition cases globally, in addition to having the world’s highest number of stunted children.

Environmentally, India is calamitous. According to the Environmental Performance Index it is 177th out of 180 countries and contains 14 of the world’s 15 most polluted cities, with its capital New Delhi ranked sixth on this scale. Last year, more than two million deaths in India were attributed to pollution and in 2018 this number is projected to rise.

The country’s water situation too is alarming. A recent federal government report warned that some 20 Indian cities including Delhi, Bangalore and nearby Hyderabad were likely to run out of ground water by 2020, affecting more tha n 120 million residents, some 24 times Ireland’s population.

The report cautioned that Bangalore faced the grim prospect of “day zero”, when its water taps would run permanently dry if drastic measures to avert the looming crisis were not swiftly implemented.

In 2018, India was ranked 115th out of 158 countries in the World Human Capital Index and, despite its perceived competence in information technology, it was 134th out of 178 nations in the Information and Communication Technologies Development Index.

The situation with regard to journalism too was abysmal, as the Committee to Protect Journalists’ 2018 Global Impunity Index, which measures the dangers faced by media personnel, noted that India was 14th out of 14 countries evaluated. And on the World Justice Report’s Rule of Law Index, the world’s largest democracy was placed 62nd out of 113 nations.

“India is a competent event manager, capable of undertaking short-term projects, but incapable of sustaining any long-term developmental ventures,” said Seema Mustafa of the Centre for Policy Analysis in Delhi.

It needed to stop competing mindlessly in the international arena and concentrate instead on its innumerable deficiencies at home if it wanted to survive in the 21st century, she warned.