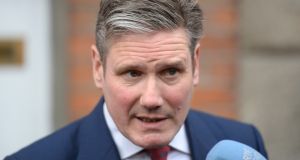 Sir Keir Starmer: “Talks with the EU are collapsing as we speak. The proposals the government put forward last week were never going to work.” Photograph: Dara Mac Donaill

The British Labour Party has accused Boris Johnson of sabotaging talks with the European Union and launching a blame game in the hope of gaining electoral advantage.

Shadow Brexit secretary Keir Starmer said the government was offering a “reassuring bedtime story” about the impact of a no-deal Brexit on the British economy.

“Talks with the EU are collapsing as we speak. The proposals the government put forward last week were never going to work. Instead of reacting to the challenge by adapting the proposals, the government is intent on collapsing the talks and engaging in a reckless blame game, and it will be working people who pay the price.”

The source said that Dr Merkel told the prime minister that there could be no deal unless Britain agreed that Northern Ireland should remain in the EU customs union permanently.

“Merkel said that if Germany wanted to leave the EU, they could do it no problem, but the UK cannot leave without leaving Northern Ireland behind in a customs union and in full alignment forever,” the source is reported as saying.

“It was a very useful clarifying moment in all sorts of ways. If this represents a new established position then it means a deal is essentially impossible not just now but ever. It also made clear that they are willing to torpedo the Good Friday agreement.”

The EU has rejected Mr Johnson’s proposal for a customs border on the island of Ireland, but it is not demanding that Northern Ireland should remain in the customs union.

Mr Johnson’s official spokesman described the 30-minute call as “frank” and “robust”, and said that although talks with the EU were at a “critical” moment they were continuing.

The British government on Tuesday published a 159-page document outlining its preparations for a no-deal Brexit, including a plan for a “no new checks with limited exceptions” policy on the Border. It says London would seek to engage with Dublin and Brussels immediately after a no-deal Brexit to mitigate its impact on the Border.

Michael Gove, the minister responsible for no-deal planning, said Britain was ready to leave the EU without a deal although there were some risks. However, Independent Unionist Sylvia Hermon told him that his government “will never be forgiven for undermining the Good Friday agreement”.