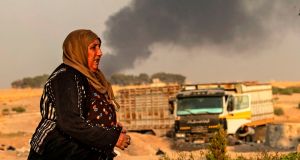 The scene following a Turkish bombardment in Syria’s northeastern town of Ras al-Ayn in the Hasakeh province along the Turkish border. Photograph: Delil Souleiman/AFP via Getty Images

Turkey launched its long-mooted offensive in northeast Syria on Wednesday, defying an international outcry over the threat posed to US-backed Kurdish forces and the campaign against Islamic State.

Writing on Twitter, Mr Erdogan said Turkey would destroy the “terror corridor” that some actors were seeking to form on Turkey’s southern border, and establish a “safe zone” that would allow Syrian refugees to return home. Turkey’s aim, he said, was to “bring peace to the region”.

He added: “We will preserve Syria’s territorial integrity and liberate local communities from terrorists.”

The Turkish offensive began with air strikes on towns across the border area, sending civilians fleeing for safety. Videos on social media showed people streaming out of the town of Ras al-Ayn where early bombings were heard.

Local media reported air strikes as far east as Qamishli, near the Iraqi border – a claim confirmed by two people in the town. But military analysts said that they expected the initial focus for the main offensive, which will be conducted with the help of Turkish-backed Syrian rebels, to be on a 100km-wide region between the towns of Tal Abyad and Ras al-Ayn.

The Britain-based Syrian Observatory for Human Rights put the death toll at eight, including two Christian Assyrians in the city of Qamishli, a husband and wife and their child as well as another man in a village outside of the town of Tal Abyad, and a child in a village west of Qamishli. Also killed was a man in Ras al-Ayn, it said. The monitor said at least seven fighters from the Kurdish-led Syrian Democratic Forces were killed in the fighting.

Earlier in the week, several dozen US special forces who had been in the area had been moved from the area in response to an order from Mr Trump prior to the assault. Kurdish forces had already removed heavy weapons under a safety mechanism deal that failed to assuage Ankara.

Turkish media said that two border towns were under retaliatory mortar and rocket fire from within Syria. There were no immediate reports of injuries.

US president Donald Trump responded to the launch by repeating his stance that the US “does not endorse” the attack, even though he appeared to give the green light when he spoke to Mr Erdogan on Sunday. Asked earlier this week if Mr Trump had told his Turkey counterpart not to invade Syria, a senior US official circumvented the question.

In a statement, Mr Trump said the US had “made it clear to Turkey that this operation is a bad idea”.

“Turkey has committed to protecting civilians, protecting religious minorities, including Christians, and ensuring no humanitarian crisis takes place – and we will hold them to this commitment,” said Mr Trump. “Turkey is now responsible for ensuring all Isis fighters being held captive remain in prison and that Isis does not reconstitute in any way, shape, or form. We expect Turkey to abide by all of its commitments, and we continue to monitor the situation closely.”

Ankara faced a fierce backlash in western nations after the launch.

Lindsey Graham, a Republican senator, described the move as a “disaster” in the making and pledged to lead an effort in Congress to “make Erdogan pay a heavy price”.

The EU called on Turkey to stop its “unilateral military action” and warned the operation risked “providing fertile ground for the resurgence of [Islamic State]”. European Commission president Jean-Claude Juncker said: “If the Turkish plan involves the creation of a so-called safe zone, don’t expect the European Union to pay for any of it.”

German foreign minister Heiko Maas said Turkey ran the risk that it would “further destabilise the region and strengthen Isis” and condemned the offensive “in the strongest possible terms”.

Speaking shortly before the operation was launched, Turkey’s foreign minister, Mevlut Cavusoglu, insisted that the operation was “our right, stemming from the UN charter, UN Security Council decisions, and international law.” He said that his nation’s “sole target” was “terrorists” in northeast Syria.

Mr Trump has also faced harsh criticism since announcing on Monday that US troops would be pulled out of the immediate area of a Turkish operation, and declaring that he was handing over responsibility for the battle against Islamic State to Ankara.

On Wednesday, Mr Trump stressed that his decision to withdraw the small number of US troops in the vicinity was related to his opposition to “endless, senseless wars”.

These steps led to accusations that he was abandoning the SDF.

The Kurdish-dominated group was trained and equipped by the US and spearheaded the fight against Isis in northeast Syria, which was home to the capital of Isis’ self-proclaimed caliphate.

But Ankara views the group’s Kurdish elements as terrorists with intimate links to militants who have waged a bloody 35-year insurgency on Turkish soil. It was enraged by the decision by the US, a fellow Nato member, to support Kurdish forces in Syria – and has long vowed to attack.

“Impossible to understand why @realDonaldTrump is leaving America’s allies to be slaughtered and enabling the return of ISIS,” she tweeted.

Ireland was among the countries to condemn the attack, with Minister for Foreign Affairs Simon Coveney urging Turkey to “refrain from this action”.

Russian president Vladimir Putin urged Turkey to “carefully weigh the situation so as not to damage the overall efforts to resolve the Syrian crisis,” the Kremlin said. Hassan Rouhani, the Iranian president, called on Turkey to reconsider its decision to launch an offensive that he said could create “new problems” for the region’s security.

Aid organisations, meanwhile, were concerned about the humanitarian impact of a new front in an eight-year civil war that has already cost 500,000 lives.

NGOs have estimated there are just under 500,000 people living within 5km of the Syrian-Turkish border east of the Euphrates river, including about 91,000 people who have fled there from other parts of Syria.

The New York-based International Rescue Committee said it was “deeply concerned” about the lives and livelihoods in the region. “A military offensive could displace 300,000 people and disrupt life-saving humanitarian services, including the IRC’s,” it said. – Copyright The Financial Times Limited 2019