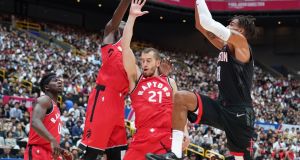 “You gotta lower your ideals of freedom if you wanna suck on the warm teat of China, ” was the wisdom proffered in a recent South Park episode.

The words will seem prophetic now to Daryl Morey, general manager of the Houston Rockets, who has been pilloried in China, and in the US, for expressing an opinion that has jeopardised the American basketball franchise’s development in the lucrative Chinese market.

Early on Saturday morning, Morey tweeted a graphic that said: “Fight for freedom, stand with Hong Kong”, a slogan used in pro-democracy protests that have roiled the city for the past four months.

He obviously had second thoughts and quickly deleted the message, replacing it with a photo of a Tokyo sunrise, but it was too late – China was apoplectic.

Facing a nation’s livid glare, he tried to walk it back, saying it was “just one thought, based on one interpretation of one complicated event”, but the mainland bayed for blood. The Rockets have been the most popular National Basketball Association (NBA) team in China ever since a young Yao Ming first donned their shirt in 2002. Now, however, they were dirt, as was the appeasing league they played in.

The state broadcaster CCTV and internet giant Tencent announced they would pull the plug on plans to air upcoming exhibition games. All related sponsors withdrew support, spitting outrage. China’s foreign ministry spokesman said Morey’s opinion was “wrong”, and he condemned the NBA for not understanding the mindset of the Chinese people.

Celebrities queued up to haughtily announce they would not be attending any of their scheduled appearances with LeBron James and friends this week. Rockets merchandise was suddenly unavailable in online stores.

The media was incensed, with CCTV leading the charge, demanding profuse apologies from Morey and the NBA, and saying: “It would be unwise for any individual to underestimate 1.4 billion Chinese people’s readiness to defend their national sovereignty and dignity.”

On social media, the topic dominated the platforms in recent days, with criticism ranging from the mild to the murderous.

It is a painful topple from grace for the NBA, a sporting franchise that has long been revered in China. More than 500 million people regularly watched their streaming platforms last year, and some 300 million play the game here.

With such a market at stake, the American basketball world went to efforts to out-apologise one another.

Rockets star James Harden, who is often in Beijing touting his running shoes of choice, was sorry on behalf of himself and his boss. As it happens, he had a cameo role in the recent South Park show where he was shown heading to China on a sales mission.

“We apologise. You know, we love China. We love playing there,” he said.

The Rockets’ owner took a public swipe at Morey, and reminded him to stick to sports and keep his nose out of politics.

The NBA rushed to apologise too, but added fuel to the fire by issuing different statements in English and Chinese. In English, a statement said it recognised Morey’s comments “have deeply offended many of our friends and fans in China, which is regrettable”. The Chinese-language version layered on the sorry sauce, however, saying it was “extremely disappointed” with his “inappropriate” actions which have “severely hurt the feeling of Chinese fans”.

More corrections and clarifications of sorts followed, but they haven’t appeased the mainland fans or indeed pleased many on the US side, who have accused the “wokest” professional sports league in the States of double standards and kowtowing to the Chinese paymasters.

The NBA is the latest example in a long list of brands recently caught in the mainland’s crosshairs for “hurting the feelings of the Chinese people”. Showing any support for the Xinjiang Muslims, the Tibetans, Taiwan or Hong Kong can all easily do it.

Party mouthpiece the Global Times said it was a simple choice between freedom of expression or business.

“The problem is that Morey’s freedom is at the expense of the Rockets’ huge commercial interests, which the team is unwilling to give up,” the paper said in an editorial. “It’s a paradox with which Americans are grappling.”

Morey, who was voted by his peers as the NBA’s executive of the year last year, is probably wishing he had tweeted the Tokyo sunrise first.

The South Park creators also issued an apology, not wishing to be left out.

“Like the NBA, we welcome the Chinese censors in our homes and our hearts. We too love money more than freedom and democracy,” they said.

They concluded by saying “Long live the Great Communist Party of China! . . . We good now China?”

They’re not. They have just been banned.