Trump calls Trudeau ‘two-faced’ over film of him gossiping 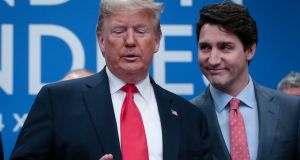 Mr Trump attacked his North American neighbour for failing to meet a Nato target on military spending in a broadside on Wednesday that undermined attempts by the 29-member organisation to present a united front despite growing internal spats.

“Well, he’s two-faced,” Mr Trump declared of Mr Trudeau, who in video from a reception at Buckingham Palace the previous evening seemed to make fun of the US leader’s rambling press conferences earlier in the day.

The US leader then abruptly cancelled a press conference to mark the conclusion of the summit in Watford, near London, saying he had spoken “so many” times over the previous few days.

“The truth is I called him [Mr Trudeau] out on the fact he’s not paying 2 per cent [of gross domestic product on defence] and I guess he’s not very happy about it,” Mr Trump said.

Mr Trump’s latest intervention exacerbated tensions as Nato leaders battled to curb disagreements in areas from Syria policy to the functionality and future of the cold war-era alliance.

The summit to mark Nato’s 70th birthday celebration concluded with Wednesday’s talks at a luxury hotel north-west of London.

There’s a fundamental question about whether the leaders can keep the channels of communication open at a time when relations are so difficult.

Mr Trump flayed Mr Trudeau in remarks to reporters on the margins of the gathering, in an echo of his frequent attacks on European allies that have failed to meet the Nato spending target of 2 per cent of GDP on defence by 2024.

“He should be paying more than he’s paying and he understands that,” Mr Trump said of the Canadian leader, whom he insisted he still thought a “nice guy”.

“I can imagine he’s not that happy but that’s the way it is.”

The Canadian prime minister did not identify the US president by name in the footage of him talking to a small group at Buckingham Palace including France’s president Emmanuel Macron and Boris Johnson, the UK prime minister.

But Mr Trudeau could be seen discussing a press conference that over-ran and also recounting how, after a statement by the person he was discussing, “you just watched his team’s jaws drop to the floor”.

Mr Trump has clashed previously with Mr Trudeau, whom he denounced as “dishonest and weak” after last year’s G7 summit in Canada.

He also suggested there had been progress towards agreeing an updated defence plan for the Baltic states and Poland, which Turkey had threatened to block unless fellow allies agreed to brand the Kurdish YPG militia a terror group.

“There have been disagreements in Nato for as long as the alliance has existed,” Mr Stoltenberg told reporters after the summit concluded. “The rhetoric is not always excellent – but the substance is perfect.”

The talks on Wednesday followed a barrage of disagreements in the run-up. Mr Macron clashed on the eve of the meeting with Mr Trump and Turkey’s president Recep Tayyip Erdogan.

Leslie Vinjamuri, head of the US and Americas programme at Chatham House, said: “There is a fundamental question about whether the leaders can keep the channels of communication open at a time when relations are so difficult. There is a danger things may escalate in a way that can’t be controlled.”

The leaders of the UK, France and Germany had met Mr Erdogan ahead of Wednesday’s gathering in an attempt to lower tensions over Ankara’s military incursion into northern Syria. Turkey is fighting Kurdish militias that have aided the western-led fight against Islamic State but are seen by Ankara as a terrorist threat.

The four leaders agreed to work together to create the conditions for the “safe, voluntary and sustainable return of refugees” from Syria.

But there was notably no mention of the return of Isis fighters to Europe – despite a jibe on Tuesday by Mr Trump to Mr Macron on the failure of Britain, Germany and France to repatriate jihadis who had travelled to Syria.

Many elements of the deliberately brief three-hour gathering on Wednesday at the Grove Hotel had been pre-agreed by alliance foreign ministers.