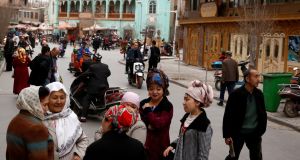 People mingle in the old town of Kashgar, Xinjiang region, China. Xinjiang is China’s biggest province and the source of much of its oil and gas. Photograph: Thomas Peter/Reuters

The provincial legislature in Xinjiang in western China, home to the mostly Muslim Uighur minority, has changed its law to allow the use of re-education camps for people influenced by religious extremists, as Beijing steps up its crackdown on the restive region.

China has been criticised by the United Nations, European and US governments, as well as human rights groups after reports that more than one million Uighurs and other Muslim minorities were being held in extrajudicial detention centres throughout Xinjiang, which is China’s biggest province and the source of much of its oil and gas.

“Governments above county level can set up education and transformation organisations and managing departments, such as vocational training centres, to educate and transform those who have been influenced by extremism,” runs the new clause in the law, published on the website of the regional legislature on Tuesday.

The new legislation is an update to a law introduced in March last year, which bans veils and “unusual” beards and encourages children to learn Mandarin Chinese, as well as requiring citizens to watch only state television.

China has long denied that it operates enforced political re-education camps in Xinjiang, and any mistreatment of minorities, but says it does operate vocational centres for minor crimes.

Beijing says the centres are necessary to stop Islamist separatists, and are aimed at halting the spread of fundamentalism.

Tensions between the Uighurs and the ethnic Han majority in China have intensified in recent years, with riots in urban centres in Xinjiang, while scores have died in terror attacks in Chinese cities.

Authorities in the provincial capital Urumqi have also stepped up an anti-extremism campaign that takes aim at the exclusive promotion of halal products such as meat and toothpaste produced according to Islamic law.

Communist Party leaders held a high-level meeting this week in which cadres were asked to post a message on the WeChat social media account saying “ . . . my belief is Marxist-Leninism. I don’t have any religions and I will fight against ‘pan-halalisation’, firm and resolute, until death”.

Urumqi’s ethnically Uighur chief prosecutor Ilshat Osman posted an essay online called “Friend, you do not need to find a halal restaurant specially for me”.

In September, public security minister Guo Shengkun called for greater “reform through education” of prisoners in Xinjiang, and urged Communist Party cadres to visit the homes of minorities in the region to tutor them in the ways of the party so everyone would be “truly held tightly together like the pips in a pomegranate”.

China says it is bringing economic stability to the region, and says areas such as tourism were booming. The territory had more than 100 million domestic and overseas tourists last year, up a third on the previous year.