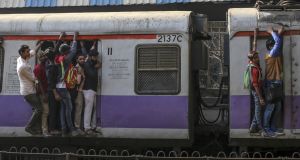 Passengers stand on the side of train carriages in Mumbai. Photograph: Dhiraj Singh/Bloomberg via Getty Images

The world’s largest recruitment drive is under way across India, with 23.7 million young men competing for 127,000 moderate- to low-paid government jobs.

Indian Rail has sanctioned 100 special trains to ferry the millions of candidates to their respective examination centres across the country.

More than 500,000 candidates take the 90-minute tests in three shifts every day, a routine that will continue until December, when all applicants will have completed their entrance tests for jobs that pay average monthly salaries of €250-€300.

Tens of thousands of aspirants, including postgraduates and others with doctorates, are taking these multiple-choice tests that include questions in mathematics, general intelligence, reasoning, science and current affairs. The tests have to be completed in 90 minutes.

According to officials, the entire recruitment process to the world’s fourth-largest rail network, which transports more than 8.26 billion passengers and ferries 1.16 billion tons of freight annually, is costing Indian Rail almost €1 billion.

The entire hiring process, however, which includes a physical efficiency test, a medical examination and related procedures after the entrance examination, is expected to take a few more months before final results are announced around mid-2019.

The last recruitment drive by Indian Rail in 2017 – for 18,252 assistant station masters, reservation clerks and other junior administrative staff – was responded to equally robustly, with some nine million applicants.

The recruitment process at the time, which was much smaller than the one currently under way, also included tests undertaken in shifts, but was concluded in less than a week.

Government jobs in India, where unemployment is endemic, are favoured by most, with Indian Rail being a favourite, as travel across the country is free.

The jobs provide security and in most cases come with subsidised accommodation, employment for an average of 30 years and a pension for life. Dismissals in government jobs at all levels are rare.

More than one million Indians continue to seek employment each month, as job growth has ground to a halt under prime minister Narendra Modi’s Hindu nationalist Bharatiya Janata Party government, which assumed office in May 2014.

According to a recent federal labour ministry report, one in three graduates in India up to the age of 29 is unemployed. But universities continue to churn out some five million graduates annually.

Burgeoning unemployment is also forcing millions of people from rural areas to migrate in large numbers to nearby cities and towns, triggering social unrest in addition to creating slums.