Hurricane Michael to bring ‘life-threatening’ waves and wind to Florida 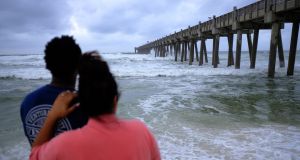 A couple watch the waves on the beach as Hurricane Michael approaches land, in Pensacola, Florida, US. Photograph: Dan Anderson/EPA

Hurricane Michael strengthened to a Category 2 storm on Tuesday as it headed for the Florida Panhandle, where authorities ordered residents to get out of harm’s way ahead of life-threatening waves, winds and rains.

Tens of thousands of people were told to evacuate coastal areas in at least 20 counties in Florida as the storm moved over the Gulf of Mexico, carrying winds of 155km/h and disrupting oil production.

Michael could grow to a Category 3 storm on the five-step Saffir-Simpson scale before it makes landfall on Wednesday in the Florida Panhandle or the state’s Big Bend area, where the state capital of Tallahassee is located, the National Hurricane Centre (NHC) forecast. If so, it would rank as the most powerful storm to strike the Panhandle in at least a decade.

“Hurricane Michael is a monster storm and it keeps getting more dangerous. We’re 12 hours away from seeing impacts,” Florida governor Rick Scott told a news conference on Tuesday. “The time to prepare is now.”

He warned of a potentially deadly storm surge that could be as much as 3.7m higher than normal sea water levels, and winds that could rise to 177km/h.

People in potentially affected areas should not take any chances against such a large storm surge, Mr Scott said. “No one’s going to survive” such a wall of water, he added.

The NHC warned residents along more than 480km of coastline, from Florida’s border with Alabama to the Suwannee River, to brace for hurricane conditions.

“You will see damage to infrastructure, you will see power outages, and services that we are used to will be interrupted due to Hurricane Michael,” he told a news conference.

Mr Scott declared a state of emergency in 35 counties along the Panhandle and Florida’s Big Bend regions. About 1,250 National Guard soldiers were assisting and more than 4,000 troops were placed on standby.

State offices, schools and universities were closed through the end of the week in Panhandle counties. Lines at gasoline stations grew as people left. Those who stayed emptied grocery store shelves of water and other supplies.

Hurricane Michael is expected to be the first major hurricane to hit the Panhandle since Hurricane Dennis in 2005, which made landfall near Pensacola, according to hurricane centre data.

Torrential downpours and flash flooding caused by the storm over the weekend caused 13 deaths in Central America.

On Tuesday morning at 8am local time, Michael’s centre was about 635km south of Panama City, Florida, heading north-northwest at about 19km/h, the NHC said.

On its current track, it would make landfall somewhere along a coastline that includes the cities and towns of Fort Walton Beach, Panama City Beach, Port St Joe and St Teresa, as well as the wildlife reserves bordering Apalachee Bay. However, forecasters always note it is not possible to predict where a hurricane will land until it is closer to the coast.

After striking Florida, Michael was forecast to move up the southeast US on Wednesday and Thursday, passing through the Carolinas, which are still recovering from Hurricane Florence last month. It would head out into the Atlantic by Friday, said Ken Widelski, a meteorologist for the National Oceanic and Atmospheric Administration.

The NHC forecast as much as 30cm of rain in parts of Florida, Georgia and South Carolina. – Reuters