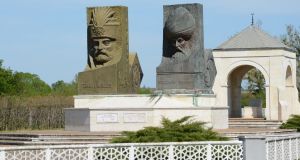 On a sultry late-summer day in southern Hungary, Prof Norbert Pap forged on through snagging branches and tangled undergrowth, disturbing dragonflies, butterflies and a foraging deer, to reach the site of his latest discovery.

Hidden deep in a thicket of trees on the swampy fringes of the River Danube, the hillock in question doesn’t look like much, but Pap is certain that it has a remarkable history.

Today it is surrounded by quiet fields straddling the Hungary-Croatia border, close to the security fence that Hungarian prime minister Viktor Orban built in 2015 to block refugees and migrants moving north from Turkey into the European Union.

But on August 29th, 1526 – as most Hungarians and many Turks know – this farmland near the town of Mohacs was a vast and bloody battlefield, the site of the greatest military clash in medieval central Europe.

At least 60,000 Ottoman soldiers led by Sultan Suleiman the Magnificent routed some 27,000 Hungarian, Polish, Czech, Croat and others troops. And Hungary’s King Louis II died along with many of the bishops, barons, counts and knights that made up the nation’s elite of the time.

“Mohacs was one of the five most important battles in Ottoman history,” says Pap, a professor at the nearby University of Pecs.

“And it is considered the blackest day of Hungarian history. In the Hungarian identity, Mohacs is the explanation for almost all subsequent negative developments. Suleiman destroyed the medieval Hungarian kingdom,” he explains.

“The Ottomans wrote that the sultan came to the hill to watch the battle and pray for victory,” the professor says after climbing down from the buried ruins of a Roman fort that would have offered a fine vantage point over the Mohacs battlefield.

Later, the Ottomans built a pavilion on the hill to mark their triumph, and Pap and his team hope to find evidence of the monument here.

“What is the significance of this site? This is where the greatest Ottoman ruler watched one of the greatest battles in Ottoman history and saw the destruction of a serious Christian medieval power . . . It led to the decline of central European powers like the Czech kingdom and Polish kingdom. And it threw Hungary into civil war and caused the rise of the Habsburgs.”

Pap’s record on such claims is strong: two years ago, 90km west of Mohacs, he unearthed the tomb where Suleiman’s organs were interred after he died of natural causes during the 1566 Battle of Szigetvar; there, the Ottomans suffered such losses in victory that they scrapped plans to take Vienna, which later prompted French diplomat Cardinal Richelieu to call it “the battle that saved civilisation”.

Now, sites with such close links to Suleiman are regaining their significance for Turkey, as its president Recep Tayyip Erdogan evokes the glory of great sultan’s empire to rekindle his nation’s pride in its Ottoman heritage.

Erdogan will visit Hungary on Monday and there were suggestions that he would go to Szigetvar to see the excavations of Suleiman’s memorial complex.

It now seems that he will stay in Budapest, however, where the highlight will be the unveiling of the renovated tomb of Gul Baba, a dervish poet and close friend of Suleiman who died in Buda shortly after the Ottomans occupied it in 1541.

Orban and Erdogan are on good terms – they share autocratic tendencies, a love of football and a loathing for lectures from the European Union – and the Hungarian was the only EU head of government to attend the Turkish leader’s inauguration in July.

Some Turkish businessmen are also doing well in Hungary. In particular Adnan Polat, a tycoon who acts as an unofficial intermediary between Budapest and Ankara, attending football matches with Orban, doing deals with his son-in-law and running the foundation that has overseen the restoration of Gul Baba’s tomb.

And yet events, both of recent years and remote centuries, inevitably complicate relations between the leaders.

For Orban, Hungary’s Ottoman era is a black chapter in its history

In rejecting refugees and migrants as a threat to Europe’s security and identity, Orban has said the long shadow of Ottoman rule gives Hungary the “right to decide that we do not want a large number of Muslim people in our country”.

“I have to say that when it comes to living together with Muslim communities, we are the only ones who have experience because we had the possibility to go through that . . . for 150 years,” he added.

For Orban, Hungary’s Ottoman era is a black chapter in its history, while Erdogan – who has been described as a “neo-Ottoman” – the expansion of Suleiman’s empire marked a glorious period that should inspire his nation today.

The leaders will bring these opposing views of history to Gul Baba’s tomb, which, by some accounts, was renovated as a kind of compensation to Ankara after Orban’s government scrapped plans for a big Turkish-funded mosque in Budapest; officials say the €7 million cost of the restoration was split between the two countries.

“I wouldn’t call it tension, but there is certainly some delicacy which has to be handled,” Hungarian government spokesman Zoltan Kovacs said of how Orban and colleagues approach historical matters with their Turkish counterparts.

“Obviously for Hungarians (the Ottoman occupation) is an important historical fact and an integral part of our past. But at the same time, we still commemorate that we lived under Turkish rule for 150 years,” he added.

Hungary finally drove out the Ottomans in 1699 but, after the Austro-Hungarian empire seized Bosnia in 1878, thousands of Muslims again took up residence in Budapest, including about 600 elite fighters garrisoned at Buda Castle.

There is still no purpose-built mosque for the 30,000 or so Muslims who now live in Hungary

“A serious problem for them was that there was no mosque in Hungary,” explains Pap.

“But they did have something else – the Gul Baba tomb, which was a traditional pilgrimage place and somewhere they could gather and pray. It was a symbolic centre for the Muslim community in Hungary.”

There is still no purpose-built mosque for the 30,000 or so Muslims who now live in Hungary. And they have kept a low profile as Orban has donned the mantle of Christian Europe’s defender and demonised refugees and migrants from the east.

If Orban joins Erdogan in honouring the memory of Gul Baba, it will be striking to see him for once acknowledge Hungary’s many centuries of interaction with the Islamic world without depicting that relationship as an existential threat.

“This is a good example of how it is possible to co-operate regarding historical legacies even in the hottest circumstances,” said Kovacs.

“Turkey is a big country, a regional power with obvious regional and cultural ambitions, so you have to be aware of that and calibrate how you orchestrate the relationship, commemorations and political relations,” he added.

History may divide them, but the two leaders will have much to discuss on migration, energy supplies and what they see as unfair foreign criticism of Erdogan’s brutal crackdown on critics and Orban’s anti-democratic reforms.

“A lot depends on Turkey, if we talk about the security of Europe, migration and the local balance of power,” said Kovacs.

“As regards EU countries – never mind countries outside the EU – no one should think they have right to say how any given nation should furbish its political and institutional system.”