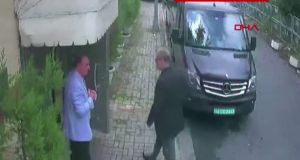 Top Turkish security officials have concluded that Saudi dissident Jamal Khashoggi was assassinated in the Saudi consulate in Istanbul on orders from the highest levels of the royal court, a senior official has said.

The official described a quick and complex operation in which Khashoggi was killed within two hours of his arrival at the consulate by a team of Saudi agents, who dismembered his body with a bone saw they brought for the purpose. “It is like ‘Pulp Fiction,’” the official said.

Saudi officials, including Crown Prince Mohammed bin Salman, have denied the allegations, insisting that Khashoggi left the consulate freely shortly after he arrived. President Recep Tayyip Erdogan of Turkey has demanded that the Saudis provide evidence proving their claim.

It remains unclear how the Turkish government determined that Khashoggi had been killed, but the conclusion that the Saudi royal court ordered it could increase the pressure on both sides of the dispute. It would make it more difficult for the two governments to come up with a face-saving story blaming Khashoggi’s disappearance on some third party, on rogue elements of the Saudi security forces, or on an accident during an interrogation that went wrong.

Turkish officials have left things murky enough – speaking on condition of anonymity and refusing to publicly disclose their evidence – that such possibilities cannot be ruled out. Some pro-government news outlets have reported that the police were still investigating the possibility that Khashoggi was abducted, not killed.

But as more than a week has passed since he was last seen, the possibility that he is alive has dwindled. The security establishment concluded that Khashoggi’s killing was directed from the top because only the most senior Saudi leaders could order an operation of such scale and complexity, the official said, speaking on condition of anonymity to disclose confidential briefings.

Fifteen Saudi agents had arrived on two charter flights last Tuesday, the day Khashoggi disappeared, the official said. All 15 left just a few hours later, and Turkey has now identified the roles that most or all of them held in the Saudi government or security services, the official said. One was an autopsy expert, presumably there to help dismember the body, the official said.

On Wednesday, Turkish media outlets published CCTV footage of what they said was Saudi intelligence officers entering and leaving Turkey via Istanbul airport on October 2nd. The footage also shows vehicles driving up to the consulate.

Erdogan was informed of his officials’ conclusions Saturday, according to several people with knowledge of the briefings, and he has since dispatched officials to anonymously tell myriad news outlets that Khashoggi was killed inside the Saudi consulate.

But Erdogan himself has not publicly accused Saudi Arabia of killing Khashoggi. Nor has the Turkish president disclosed specific evidence to back up that allegation. His reticence has raised questions about whether Turkey might ultimately back away from an explicit accusation in the interest of preserving relations with Saudi Arabia, a wealthy regional heavyweight.

Erdogan may prefer not to alienate the kingdom as he struggles to manage a troubled economy and a many-sided power struggle over the outcome of the civil war in neighboring Syria.

A publication with close ties to Erdogan’s government, the newspaper Sabah, reported on Tuesday that unnamed officials had said the police were examining the possibility that Khashoggi had been abducted and not killed, possibly with the help of another country’s intelligence officers.

The official who spoke about Khashoggi’s killing said that report and other similar ones were incorrect and were probably the result of the limited information shared among different agencies within the Turkish government. The need to protect intelligence sources – which might include intercepted communications or human informers – also contributed to the government’s reluctance to reveal its evidence, the official said. That need for secrecy could also hamper any efforts to prosecute any Saudi agents involved.

Another person briefed on the matter, speaking on condition of anonymity to disclose confidential details, said on Saturday that Turkish intelligence had obtained a video of the killing, made by the Saudis to prove that it had occurred.

A commentator close to Erdogan’s government said so publicly Tuesday. “There is a video of the moment of him being killed,” Kemal Ozturk, a columnist in a pro-government newspaper and the former head of a semi official news agency, said in an interview on a pro-government television network, citing unnamed security officials.

Saudi Arabia continued to disclaim any knowledge of Khashoggi’s fate and even expressed concern for his safety. Both governments said on Tuesday that Saudi Arabia had allowed the Turkish police to search the Istanbul consulate, a deviation from normal diplomatic agreements.

Another senior Turkish official, speaking on condition of anonymity to discuss diplomatic strategy, said Ankara hoped that Washington and the international community would take the lead in challenging Saudi Arabia over the fate of Khashoggi, a legal resident of the United States and a columnist for the Washington Post.

The Trump administration had been largely silent on the matter until Monday, when President Donald Trump said he was “concerned” about it in response to a question from a reporter. The administration may have been hesitant to enter the feud in part because Saudi Arabia is a close US ally.

Trump has repeatedly expressed his enthusiasm for the kingdom’s dominant leader, the 33-year-old crown prince. But with Khashoggi unseen for days, there were signs on Tuesday that the pressure was increasing. Secretary of state Mike Pompeo called on the Saudi government “to support a thorough investigation of Mr Khashoggi’s disappearance and to be transparent about the results of that investigation”.

On Wednesday, Trump said he had talked to officials in Saudi Arabia at the highest levels about the disappearance of Khashoggi and wants the United States to get to the bottom of the matter. “We’re demanding everything. We want to see what’s going on,” Trump told reporters. “It’s a very serious situation for us and for this White House.”

In an opinion article published on Tuesday in the Washington Post, Khashoggi’s fiancee, Hatice Cengiz, urged Trump to “help shed light on Jamal’s disappearance”. She wrote that she was “confident” he was still alive, but her hope was fading with each passing day.

The UN human rights office also called for Saudi Arabia and Turkey to conduct a thorough investigation and to make the results public. “This is of serious concern, the apparent enforced disappearance of Khashoggi from the Saudi consulate in Istanbul,” Ravina Shamdasani, a spokeswoman for the human rights office, told reporters in Geneva.

Two other Turkish government officials confirmed the broad outlines of a report in Sabah detailing the movements of the Saudi team that arrived in Istanbul on the day of Khashoggi’s disappearance. Both officials spoke on the condition of anonymity because they were not authorised to comment publicly.

The newspaper said that two private Gulfstream IV planes belonging to a charter service that has often worked with the Saudi government, Sky Prime Aviation, took off from Riyadh on the morning of October 2nd carrying 15 passengers – all intelligence agents or government officials.

One plane landed at Istanbul’s Ataturk Airport at 3.13am that day with nine passengers on board. They checked into two hotels near the consulate and booked rooms for three nights. But they collected their belongings later that day and took off in the same jet at 10.46pm, stopping in Dubai on the way back to Riyadh.

A second plane landed in Istanbul at 5.15pm that day with six passengers. All went directly to the consulate and quickly returned to the airport; their plane took off barely an hour after it had arrived, at 6.20pm, the newspaper reported, stopping in Cairo as it returned to Riyadh.

Security camera footage showed Khashoggi entering the consulate shortly after 1pm that day. Cengiz, his fiancee, waited outside, and she has said he never emerged. Two and a half hours after he entered the facility, six vehicles with diplomatic license plates pulled out, carrying 15 Saudi officials and intelligence officers, Sabah reported.

Two other vehicles, including a black Mercedes Vito van with darkened windows, went from the consulate to the consul’s residence nearly 200m away. Turkish employees of the residence had unexpectedly been told not to report for work that day, the newspaper said.

Sabah reported, without naming its sources, that police investigators suspected that Khashoggi was in the van. Friends of Khashoggi had planned on Tuesday to hold a funeral prayer for him, which had been expected to turn into a demonstration against Saudi Arabia. But his friends cancelled those plans, and they could not be reached to explain their decision. – New York Times