US president attacks ‘huge’ trade deficit but says he blames predecessors, not China 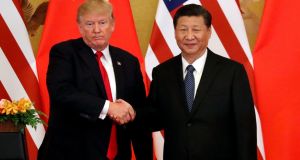 US president Donald Trump and China’s president Xi Jinping meeting in the Great Hall of the People in Beijing, China on Thursday. Photograph: Jonathan Ernst/Reuters.

China can bring about a swift and easy resolution to the Korean nuclear crisis, US president Donald Trump said during his state visit to Beijing, suggesting the Chinese must raise pressure on Pyongyang to abandon its nuclear weapons.

“China can fix this problem easily and quickly, and I am calling on China and your great president to hopefully work on it very hard. I know one thing about your president – if he works on it hard, it will happen, there’s no doubt about it,” Mr Trump told a business event in the Great Hall of the People, seated beside his host, President Xi Jinping.

During his five-nation Asian tour, Mr Trump has made resolving the North Korean nuclear crisis a priority, along with trade. He wants China to do more as Pyongyang’s chief economic sponsor and ideological ally.

Beijing says its influence in North Korea is overstated, and it is doing all it can to bring about a peaceful end to the nuclear crisis.

“Time is quickly running out and we must move fast. And hopefully China will act faster and more effectively on this problem than anyone. I’m also calling on Russia to help rein in this potentially very tragic situation,” said Mr Trump.

Mr Xi spoke briefly on the crisis, saying China would “persist with the goal of denuclearising the Korean peninsula and solving the issue through talks”.

The leaders of the world’s two biggest economies spent the first day of the three-day state visit sightseeing in the Forbidden City and Mr Trump managed to work around China’s ban on Twitter to tweet how much he and his wife Melania had enjoyed themselves.

At the signing event, deals worth more than $250 billion (€215 billion) were signed.

During his remarks after the signing ceremony, Mr Trump hailed his relationship with Mr Xi, and described him as “a very special man”.

“We have had several conversations about our common goals and interests. Beyond that, we talk often. There is a very good chemistry between the two of us, believe me,” the US president said.

Mr Trump then went on to criticise China’s enormous trade surplus with the United States.

“Trade between China and the United States has not been over the last many, many years a very fair one for us. America has a huge annual trade deficit with China. We must immediately address the unfair trade practices that brought this trade deficit,” he said.

“I don’t blame China. After all, who can blame a country for being able to take advantage of another country for the benefit of its citizens? I give China great credit. In actuality, I do blame past administrations for allowing this out-of-control trade deficit to take place. We have to fix this because it just doesn’t work. It is just not sustainable,” he said.

While North Korea and trade were uppermost on Mr Trump’s agenda, Chinese priorities are very different.

On the one-year anniversary of Mr Trump’s phone call to self-ruled Taiwan’s president Tsai Ing-wen, Mr Xi told Mr Trump that for China, Taiwan was the most important and sensitive issue in Sino-US ties.

Taiwan separated from mainland China after the KMT Nationalists lost the civil war in 1949, but Beijing does not recognise Taiwan as a separate entity and has pledged to take it back, even by force if necessary. It was furious at Mr Trump’s phone call to Ms Tsai.

After Beijing, Mr Trump heads to Vietnam and the Philippines where he will attend two Asia-Pacific regional summits. Mr Xi will also attend the Vietnam meeting.

A major topic at these gatherings will be China’s territorial ambitions in the South China Sea, which have caused tensions with Beijing’s neighbours. Washington has been critical of China’s militarisation of the region.

The two leaders clearly decided to defer that argument until the summits, but US secretary of state Rex Tillerson said there had been a “frank exchange” on the issue in bilateral talks.