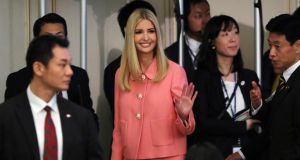 As Donald Trump might say, the room was half-full. Ivanka Trump, the US president’s daughter and adviser, was the much-heralded guest at a government-sponsored conference on women’s empowerment in Tokyo on Friday, just two days before his arrival there on his first stop of an Asia tour.

Yet Ivanka Trump spoke to a room with so many empty seats that ushers hustled to move audience members forward several rows in the minutes before she walked to the podium. The lukewarm turnout contrasted with the breathless coverage of her visit by the Japanese news media, which followed Trump’s every move around Tokyo and treated her landing at Narita International Airport and dinner at a luxurious restaurant on Thursday night as major news.

Japanese police touted the formation of a special squad of female officers to guard Trump during her visit, and the foreign ministry ran a lottery for admission to her speech at the Prince Hotel, near the foot of Tokyo Tower.

Josh Raffel, a White House spokesman, said Trump’s speech “was the most registered event” at the conference, “but security delayed everyone from being able to get into the room on time”.

Less than a quarter of Japanese are confident Donald Trump will do the right thing in world affairs, down 54 percentage points from President Obama’s rating

Kyoko Hokugo, director of the gender-mainstreaming division at Japan’s foreign ministry, said registration for the event was high, but “it was unfortunate that there were several people who could not enter the room during the speeches of prime minister [Shinzo] Abe and Ms Ivanka Trump. We needed to shut the door during their speeches for our security reasons.”

Perhaps another hint could be found in the Japanese public’s view of Donald Trump: according to a survey last month by the Pew Research Center, less than a quarter of the population is confident that Trump will “do the right thing in world affairs”, down 54 percentage points from the confidence expressed for President Obama last year.

Still, Abe is one of Trump’s closest allies among world leaders, and he has steadfastly supported the Trump administration in its aggressive stance toward North Korea. Commentators in Japan have suggested Ivanka Trump played an instrumental role in planting the seeds of that relationship, which has since blossomed with the leaders’ shared love of golf, which they are scheduled to play during Donald Trump’s visit.

“Mr Trump didn’t like Japan at first,” Katsuya Konishi, a journalist, said on a morning news show on TV Asahi on Friday. “But he gradually changed his mind. I think it was the influence of Ivanka. She said Prime Minister Abe is smart and advised Mr Trump to listen to him.”

Ivanka Trump’s appearance at the World Assembly for Women added a touch of celebrity glamour to the event, and was consistent with Abe’s approach to women’s empowerment, in which public gestures have outstripped genuine change. In his introductory remarks at the Friday event, Abe invoked his often-stated goal of creating a society in which women can “shine”.

But concrete changes have been slow to materialise. This week the World Economic Forum released its annual Global Gender Gap Report, which ranked Japan 114th out of 144 countries in making progress towards gender equality. In a parliamentary election last month women won about only one in 10 seats.

And although Abe said that 1.5 million more women had joined the workforce since he became prime minister, five years ago, making women about 45 per cent of the total in Japan, more than half of them work in part-time jobs with lower benefits and fewer hopes of career advancement.

“What is Ivanka Trump going to be to Japan more than a celebrity figure?” said Nancy Snow, a professor of diplomacy at Kyoto University of Foreign Studies who attended the speech. “Is she really going to up the ante here or move the needle? It’s sort of window dressing and making Japan maybe feel better about itself, despite these statistics.”

Among Japanese, reaction to Trump’s visit reflected some entrenched attitudes towards women. Several commentators on TV Asahi noted the salmon-coloured miniskirted suit that Trump wore for her speech, and one suggested that her skirt was “rather short” for a presidential adviser.

Several women who attended Trump’s speech commented on her appearance in explaining why they admired her. “She is a beautiful female leader,” Rena Hayakawa, a 21-year-old political-science student at Meiji University in Tokyo, said before the speech. “Her fashion is great. She is a role model for women.” Maina Tanaka, a 33-year-old financial-trade dealer, said that she appreciated Trump’s “fair views on politics and economy” and that she respected how Trump “stays positive and gorgeous”.

Mieko Nakabayashi, a professor of politics at Waseda University, said Trump’s glamour would draw attention to the cause of women. “She’s not just an official but also a princess of the president,” said Nakabayashi, who spent a decade as a budget staff member in the United States Senate. “So that kind of celebrity is really liked in Japan.”

Nakabayashi added that many Japanese women were not yet conscious of the large pay gap between men and women. “Therefore, for the Japanese government, getting attention is really an important step.”

In her speech Trump focused on initiatives in the United States, citing the president’s budget plan for paid family leave and his administration’s proposed tax changes, which she said would “put more money back in the pockets of hard-working Americans.”

She also called for countries like the United States and Japan to “empower women who live in countries that prevent them from leading”. In Abe’s introductory remarks he said Japan would contribute $50 million, or €43 million, to the Women Entrepreneurs Finance Initiative, a programme that aims to lend money to women’s businesses that Ivanka Trump helped introduce at the Group of 20 summit meeting in Germany in July.

Critics noted that Trump, who took no questions from the audience or the news media, did not address concerns about the way workers are treated at factories in China and Indonesia that manufacture clothing for the fashion brand that Trump founded.

Over the summer Trump’s brand called off a deal with a large Japanese clothing company after learning that its largest shareholder was a government-owned bank. – New York Times