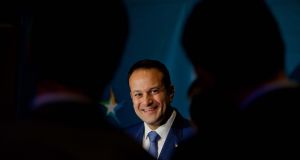 Taoiseach Leo Varadkar said the relationship that exists between Ireland and the US “is much stronger than any particular administration or president of the United States”. File photograph: Tom Honan

Taoiseach Leo Varadkar has said the invitation to Donald Trump to visit Ireland still stands, although no arrangements are being made, as he pledged to continue to maintain the strong relationship between Ireland and the United States.

Speaking at the end of his trade mission to the US west coast, Mr Varadkar said that “the relationship that exists between Ireland and America is much stronger than any particular administration or president of the United States. It is economic, cultural; it is about family connections. My overriding objective is to put Ireland’s interests first, and that is to maintain that really strong relationship that we have between Ireland and the States.”

Asked about his views of the morality of some of Mr Trump’s opinions and policies, Mr Varadkar replied that he intended to raise some issues with the US president when he visits the White House next March. “We will continue to put the relationship between Ireland and the United States first. That doesn’t mean that we won’t disagree, and disagree publicly, with the US administration on some issues. Climate change is one of those; the death penalty too; we have a constitutional ban on that in Ireland, and there are issues of human rights. When I travel to DC in March I certainly intend to bring up those issues.”

Mr Varadkar was speaking after Mr Trump last week called for the death penalty to be imposed on the suspect in the terrorist attack in lower Manhattan. “He killed 8 people, badly injured 12. SHOULD GET DEATH PENALTY!” Mr Trump tweeted, in comments that legal experts say may imperil the prosecutor’s case against the suspect.

NYC terrorist was happy as he asked to hang ISIS flag in his hospital room. He killed 8 people, badly injured 12. SHOULD GET DEATH PENALTY!

Asked if a visit by Mr Trump would be his worst nightmare, Mr Varadkar replied: “It would not be my worst nightmare. I can guarantee you there are much more serious things that could befall Ireland than the visit of any individual.”

The Taoiseach’s predecessor, Enda Kenny, extended an invitation to Mr Trump to Ireland during his visit to the White House on St Patrick’s Day this year, when the US president described Mr Kenny as “my new friend, a great guy”.

Mr Trump is expected to make a “working visit” to the United Kingdom early next year, possibly in January, although the trip is expected to be downgraded from the full state visit originally proposed by Prime Minister Theresa May. That invitation sparked criticism from MPs from both main parties, including the speaker of the House of Commons, John Bercow.

Mr Varadkar is expected to visit a number of European countries in the coming months, including in eastern Europe, as Ireland seeks to forge deeper relationships with other EU countries as the UK prepares to depart the European Union.

Mr Trump is currently on a 12-day visit to Asia; in Japan he appeared at a campaign-style rally for American troops stationed in Tokyo. “No one – no dictator, no regime and no nation – should underestimate, ever, American resolve,” Mr Trump said in his speech, without mentioning any individuals. Tensions with North Korea about its nuclear activity is expected to overshadow Mr Trump’s visit to the region. Pyongyang has intensified its nuclear testing since Mr Trump’s inauguration, sparking warnings from the US president about retaliation. Although the US president is due to visit South Korea he will not visit the demilitarised zone between it and its northern neighbour. Mr Trump will also visit China amid continuing trade tensions between the two countries.